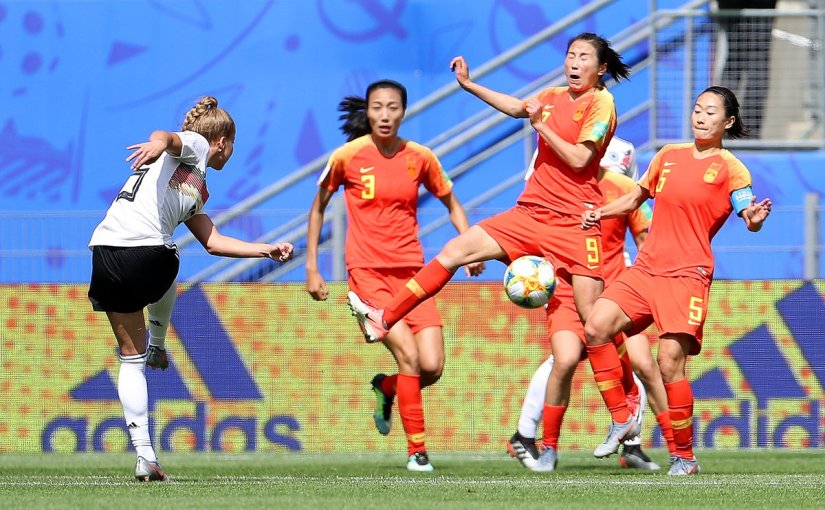 It was a good day for the favorites in France even if it wasn’t an easy day. Two-time World Cup champion Germany clawed their way past a feisty China side on a second half stunner from teenager Giulia Gwinn. Next up was Spain who needed a late second half comeback to defeat debutants South Africa for their first World Cup victory. Norway rounded out a good day for the favored sides with much easier 3-0 victory against an overmatched Nigeria squad.

It wasn’t easy for two-time World Cup champion Germany, but in the end, they were able to walk away from their opening match with all three points after a 1-0 victory over China. For 65 minutes, China held the German attack at bay, but the dam eventually broke in the 66th minute with a screamer from teenage sensation Giulia Gwinn.

This won’t be the scoreline that many expected, but Germany will not complain about taking home all three points against a defensively sound China side that created a few looks on goal themselves. With a good Spain team next on the schedule, grabbing the victory on Saturday will do a world of good for the Germans who are viewed as a tournament favorite.

Germany held on to take all 3 points against China thanks to Giulia Gwinn’s beautiful winner. Our 90 in 90 ⬇️ #FIFAWWC pic.twitter.com/FKNr0EVg7X

Things could not have started better for South Africa in their Women’s World Cup debut, taking a first half lead on Spain off a beautiful golazo from Thembi Kgatlana. Even though they continued to cede possession to Spain all game long, that 1-0 lead was looking safe before everything fell apart in the second half.

Of all the favorites playing in today’s matches, Norway was the only side to avoid and scare and cruise through rather easily with three points. Even without their star player Ada Hegerberg, the Norway attack had no issues breaking through the Nigerian defense.

Three first half goals were more than enough to give Norway the victory and second place in Group A, separated by just goal difference with France.

Norway scored 3 first-half goals and never looked back against Nigeria.

Check out the full highlights in our 90′ in 90″ ⬇️ pic.twitter.com/VOV1ZnMjpV

Saturday’s action featured seven goals across the three matches that were played, but these three stood out from the pack. Germany was saved by a screamer from a teenager, South Africa gets a historic first, and Norway proves their offense is lethal no matter who is up front.

Giulia Gwinn fires Germany into the lead with a sweet hit from outside the box. #FIFAWWC pic.twitter.com/up4b1yMBgz

Still just a teenager, Giulia Gwinn is already making an impact for Germany at the international level and on the biggest stage to boot. Her second half screamer was enough to settle the nerves and fend off a dangerous China side.

South Africa did not waste any time making an impression in their inaugural Women’s World Cup appearance. Just 25 minutes into their debut match against Spain, Thembi Kgantlana scored the first Women’s World Cup goal in her country’s history.

Without Ada Hegerberg at their disposal, Norway will need other attackers to pick up the slack. Their first half onslaught against Nigeria, highlighted by the rocket from Lisa-Marie Utland, was a warning message to defenses across Group A.

We are through two days of matches at the 2019 Women’s World Cup and both Group A and Group B have completed their first group stage games. Here’s how the two groups stand after their first matchday.

France and Norway were both favored to advance out of this group and they showed why in their opening matches. France holds the top spot courtesy of goal differential, but if all goes right, Group A could be decided when the two face-off on Wednesday.

The two favorites in Group B sit one-two in standings after the first matchday. Spain claims the top spot thanks to their superior goal differential following their 3-1 victory over South Africa. This is another group that should become a lot clearer after the top sides do battle on Wednesday in France.

Sunday features another triple-header of Women’s World Cup matches with action shifting to Group C and Group D. It’s sure to be a fun day with some fresh faces joining the action for the first time or the first time in a long time.

Australia has high hopes for France but they will be tested against an Italy side returning to the World Cup for the first time in 20 years. If either sides has hopes of automatically advancing out of this group, they need a result in this contest.

Traditional powerhouse Brazil will be shorthanded when they take on newcomers Jamaica in Group C. Marta will be out for Brazil as she recovers from a thigh injury but Brazil will still enter the match as heavy favorites.

Wrapping up Sunday’s action is a Group D match between England and Scotland that means a little more than just three points. The two longtime rivals share an island and a mutual disdain for one another. Three points could go a long way for either side.

Jennifer Hermoso joins Wendie Renard atop the Golden Boot standings following her two penalty goals against South Africa. In total, six different players added their names to the list with goals on Saturday.