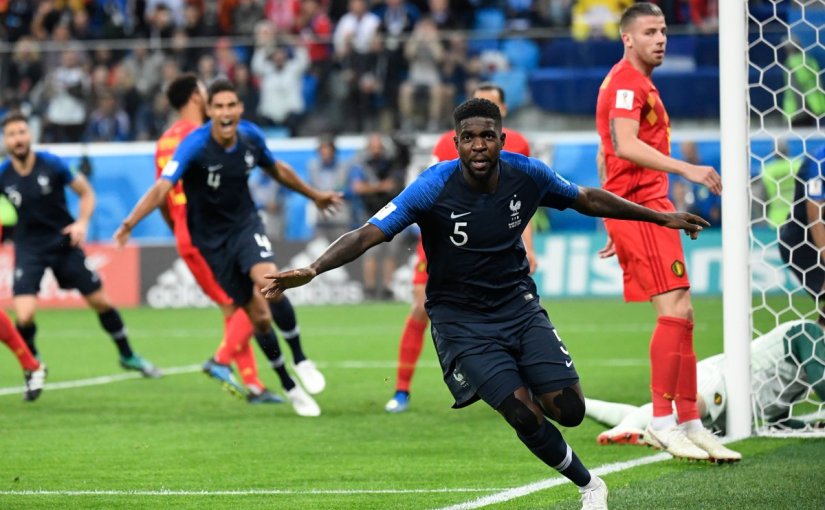 Twenty years after reaching its first World Cup Final, France returns to the Final following a 1-0 victory over Belgium in the first semifinal match of the 2018 FIFA World Cup. A rather lackluster contest was decided in the 51st minute off a header from defender Samuel Umtiti that found its way past Thibaut Courtois for the game’s only goal.

Chances were few and far between for either side and France was comfortable simply playing for the 1-0 result. Style points mean nothing at this point and France is more than fine with that as they book a spot in the World Cup Final against either England or Croatia.

With some down time between now and Sunday’s Final, France will sit back and watch England and Croatia play the second semifinal on Wednesday to see which side will be joining them in Moscow for the trophy.

What should have been one of the best games of the tournament turned out to be more of a disappointment for fans. None of that will matter to France who defeated Belgium 1-0 in their semifinal match to advance to the World Cup Final for the first time since 2006 and third time since 1998 when France won.

A goalless first half gave way shortly into the second half when France defender Samuel Umtiti scored a beautiful header off a corner kick to push France in front in the 51st minute. Umtiti’s goal opened up the game a bit as France pushed for a second while Belgium became desperate for an equalizer.

All the effort was for nothing however since neither side could find a way past the two keepers to put more goals on the board. After six minutes of stoppage time, the final whistle blew and France was off to the World Cup Final to take on either England or Croatia on Sunday.

For Belgium, its last great shot at international glory may have slipped away in the semifinal but the tournament is not yet over for them. They can go home with a bit on consolation if they can win the Third Place match scheduled for Saturday.

France advanced to their 3rd FIFA World Cup final in country history with their win over Belgium.

Catch all the highlights in our 90′ in 90″ 👇 pic.twitter.com/UClRLIjtHO

One World Cup Final spot is settled and now we wait to see who joins France in Moscow when England and Croatia face-off in the second semifinal scheduled for today.

Not too much in the way of standout plays from the first semifinal game on Tuesday afternoon but we did get two moments that really stood out. Samuel Umtiti scored the goal that put France into the World Cup Final and Kylian Mbappé showed why he’s a head above the rest.

Just a shade over five minutes into the second half, defender Samuel Umtiti scored the goal that eventually pushed France into the World Cup Final on Sunday. Rising above everyone, Umtiti beautifully deflected a header into the net for the lone goal of the match.

The center back heads home the corner to give France the 1-0 lead. 🇫🇷 pic.twitter.com/Y5MtXUpvDg

No goal came of it, but this back-heel no look pass from Kylian Mbappé to Olivier Giroud is top class. Mbappé is likely to win the Best Young Player award for the tournament and could be a frontrunner for the Golden Ball as best all around player. Plays like this are what set Mbappé apart from the rest of the field.

Check back tomorrow for more great plays from the 2018 FIFA World Cup.

We know for certain France will be playing in the World Cup Final on Sunday. What we don’t know if who they will be going up against at Luzhniki Stadium in Moscow. That will be decided today between England and Croatia.

Belgium may not be able to raise the trophy but its tournament still goes on as they will play in the Third Place match on Saturday in St. Petersburg against the loser of England and Croatia.

One semifinal down and one to go where it will be determined who joins France in the World Cup Final on Sunday in Moscow. Two unlikely semifinalists in England and Croatia will do battle with the winner heading to the World Cup Final and breaking a long drought in the process. If England emerge victorious, it will be the Three Lions first trip to the Final since 1966 when they won the tournament. Should Croatia prevail it will be the first trip to the Final for the nation.

Coming off a somewhat disappointing game between France and Belgium we can only hope England and Croatia provide some fireworks for all the fans tuning in on Wednesday.

One of these sides will be ending a long World Cup Final drought with a victory on Wednesday. Croatia has never been to the Final in 20 years of competing as an independent nation and England have not made the trip since winning it all in 1966 on home soil. Coming off two extra time games, Croatia will need to muster whatever energy it had left in the tank to keep up with a mostly fit England side.

No change to the Golden Boot standings and it is becoming increasingly likely this is Harry Kane’s race to lose.