Wednesday was not a day for those who enjoy high scoring soccer. Three goals, across three games marks the lowest scoring day of the 2018 FIFA World Cup to date. All three goals came via high profile players in Cristiano Ronaldo, Luis Suárez, and Diego Costa so at least there was some name recognition for the casual fans.

The results gave us our first Round of 16 participants in Russia and Uruguay but also meant Saudi Arabia, Egypt, and Morocco have all be eliminated from contention.

Another game and another goal for Cristiano Ronaldo propels his Portugal side to three points in a 1-0 win over Morocco. Ronaldo struck early again, just four minutes in, to give his side an advantage they never relinquished. For long stretches of play, Morocco looked the better side but could never find the back of the net. As a result, Portugal is on the brink of qualifying for the Round of 16 while Morocco has been eliminated from contention at the 2018 World Cup.

Cristiano Ronaldo’s goal was enough to give Portugal the win over Morocco.

A rough opening game for Luis Suárez was quickly erased with a first half goal against Saudi Arabia that turned out to be the match winner when all said and done. Saudi Arabia responded nicely after being drubbed by hosts Russia in their first match but never threatened much going forward. Uruguay’s win puts them and Russia into the Round of 16 and sets up a winner take all match on Monday to determine who wins Group A. With the result, Saudi Arabia and Egypt has been eliminated from further contention.

Luis Suarez’s goal was the difference as Uruguay defeat Saudi Arabia to advance to the round of 16.

Wednesday’s third and final game ended like all the rest that preceded it, with a single solitary goal on the board. Diego Costa notched his third of the tournament after a blocked shot ricocheted off his knee and past the Iranian goal keeper. It looked as if Iran tied the game later in the second half but VAR determined the goal was offside, preserving Spain’s lead. Spain joins Portugal on top of Group B and any result from their game against Morocco will see them advance. Iran must win their game with Portugal if they wish to move on.

Spain controlled the possession all game and eventually broke through to get the win vs Iran.

With two groups now in the books for Match-day 2, the knockout rounds are beginning to take shape. Russia and Uruguay already know they will be advancing it just remains to be seen who wins the group. Spain and Portugal still have work to do, but control their own destiny.

Only three goals were scored across all three of Wednesday’s matches making this section rather easy to complete. Doesn’t matter how pretty or ugly the goals were, they all made today’s list.

Portugal has scored four goals through two games in this World Cup and all have come courtesy of their star, Cristiano Ronaldo. This marks the second time Ronaldo has scored in the opening five minutes in as many games in Russia.

Cristiano Ronaldo does it again!

He heads home the corner to put Portugal up 1-0 early against Morocco. pic.twitter.com/FDoyvInvt4

Luis Suárez was mostly a non-factor in Uruguay’s win over Egypt in the first group stage match but he was the only reason his side escaped with three points in their match against Saudi Arabia on Wednesday.

The ball lands at his feet on the corner and he taps it home to give Uruguay a 1-0 lead. pic.twitter.com/gsBC1qFq5Y

Sometimes it’s better to be lucky than good as Diego Costa found out in Spain’s victory over Iran. Costa was the beneficiary of lucky bounce off his own knee from a blocked shot that turned into the game winning goal for his side.

Sometimes luck is all you kneed.

(we’ll see ourselves out) pic.twitter.com/B6arwyukFU

Check back tomorrow for more great goals from the 2018 World Cup.

Desperate times call for desperate measures and Milad Mohammadi took that to heart in the dying moments of Iran’s loss to Spain on Wednesday. Needing to get a little extra power on his throw in, Mohammadi attempted to create extra momentum on his throw by flipping forward. It did not go as planned.

Credit Mohammadi for this, on the biggest stage in world soccer, he attempted something few others would even dream of trying. The execution was poor but the attempt alone is worth applauding.

Group A and Group B have completed their second round of group play and the knockout rounds are beginning to take shape.

Russia and Uruguay will both advance to the Round of 16 out of Group A with the group winner to be determined on Monday. Egypt and Saudi Arabia have been eliminated.

Group B still remains wide open but Spain and Portugal are in position to advance after two games of group play. Morocco has been eliminated from contention. 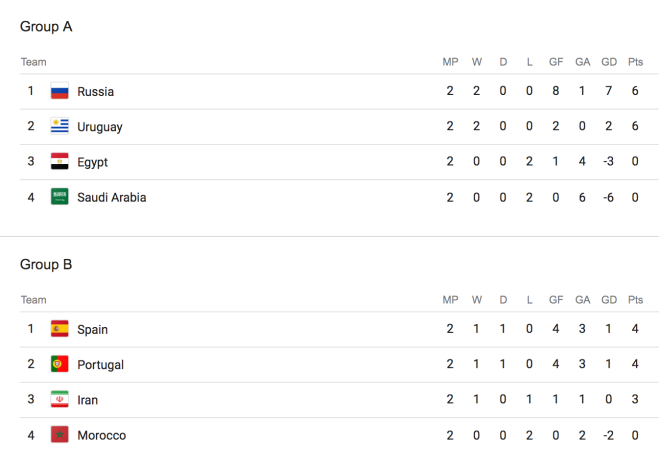 Two world powers in France and Argentina highlight Thursday’s schedule but one will be more desperate than the other. Coming off a victory in their opening game, France could wrap up a Round of 16 spot pending the outcome of the Denmark/Australia match earlier in the day.

Coming off a disappointing draw with Iceland, Argentina will be desperate to capture all three points over Group D leader Croatia in pursuit of a knockout round spot. Croatia can take a major step towards the knockout rounds with a win of their own.

If Australia can replicate their performance from their opening game, they can challenge Denmark and keep their hopes alive for a Round of 16 spot. On paper, Denmark has better attacking options but never count out the Socceroos ability to come up big when needed.

France escaped their opening round match with all three points but they will be in for another test in their second game against Peru. Against Denmark, Peru proved they have no fear going forward and creating offense any chance they get.

As a popular pick for tournament dark horse, Croatia proved they belonged with an opening match win over Nigeria. Argentina on the other hand struggled in a draw with Iceland. There will be a lot on the line for both sides when they meet in the second round of Group D play on Thursday.

The Golden Boot Award goes to the stop goal scorer at the 2018 FIFA World Cup.