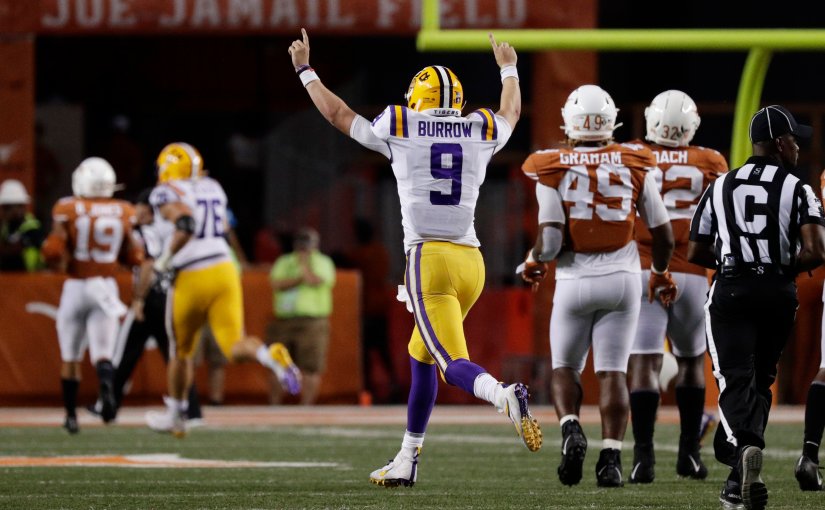 After each week of the college football season, a fresh set of rankings drop, highlighting the Top 25 teams in the nation. There are two major polls used in the college football, the AP Poll voted on by members of the media, and the Coaches Poll voted on by, well you can probably figure that one out. In October, the College Football Playoff rankings join the other two and take over as the base rankings for the rest of the season.

Two weeks of college football are in the books and for the first time this season, there was some significant movement in the polls after a busy slate of games. Let’s take a peak at how the teams stack up heading into Week 3.

No change in the Top 3 as Clemson, Alabama, and Georgia all won decisively. Louisiana State is the big mover after their victory over Texas to vault all the way up to No. 4 and put three SEC teams in the Top 4.

Michigan scrapes by Army in overtime and falls three spots while Florida jumps into the Top 10. Texas put up a battle against LSU but the loss ultimately sends them down three spots. Same case for Texas A&M after falling to Clemson. Washington is the big loser on the week, dropping nine places after an ugly loss to California.

Maryland makes its Top 25 debut after thrashing previously ranked Syracuse by 43 points on Saturday. Southern California and Virginia join the Terrapins in climbing from the depths of the unranked.

On the coaches side, the Top 4 remains steady as LSU only jumps a single spot to No. 5 in the poll. Michigan once again pays for its struggles with a three spot drop while rivals Texas and Texas A&M are both docked four places in the standings.

Mimicking the AP poll, Washington takes a nine spot tumble for their inexplicable loss to California at home. On the flip side, Auburn, Penn State, and Utah were the big winners in the voting, moving upwards multiple spots.

Mississippi State, Southern Cal, and Maryland are the three new sides joining the party with the Bulldogs being the one difference between the Coaches and the AP.

Let’s take a quick peek at who the Top 25 teams will be playing in Week 3.

That is a pretty grim schedule with no AP Top 25 sides facing-off in Week 3. We came close to the first ever ranked showdown between Iowa and Iowa State, but the Cyclones were on a bye and fell out of the Top 25.

There are still some attractive matchups to watch this weekend with Pitt and Penn State meeting for the 100th time in their history while 2017 National Champions Central Florida play host to former ranked squad Stanford in Orlando.