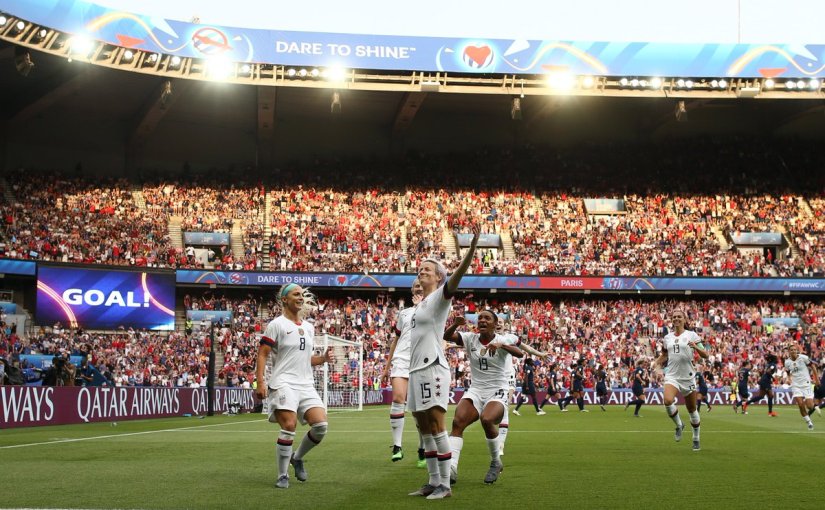 All the hype and all the waiting for France and the United States was worth it as the two nations turned in a match we will not soon forget. Megan Rapinoe bagged another brace and Crystal Dunn turned in the performance of her career and right back to send the United States through to the semifinals and keep their dreams of a World Cup repeat alive.

With all the hype surrounding the match, you could have forgiven France and the United States if they didn’t live up the everyone’s lofty expectations when they met on Friday in Paris. Instead, arguably the two best sides at the 2019 FIFA Women’s World Cup delivered a match for ages at the historic Parc de Princes.

Once again the United States started fast, taking an early lead in the fifth minute when Megan Rapinoe sent a free kick towards goal that somehow snuck through everyone and past the France goalkeeper for a 1-0 USA lead. In all five of their games at this tournament, the United States has scored within the opening 12 minutes in every one.

Trailing just five minutes into a match is never ideal, but France settled quickly and found their game as the first half went along. For the most part, France looked the better side and controlled the bulk of possession. It appeared a goal was imminent, but for as much pressure as they were creating, nothing was materializing.

A lead is a lead, but that 1-0 lead looked very shaky and the United States seemed to know it. They came out guns blazing in the second half but were unable to find a second goal for some cushion. In the 65th minute, the breakthrough arrived and it was Megan Rapinoe once again finishing off a terrific counter attacking goal for a 2-0 lead.

Just when it looked like the United States could breath easy, France struck back to cut the lead in half and setup an intense final ten minutes. Off a set piece, France defender Wendie Renard was left unmarked in the box and headed home a ball to make the score 2-1 in the 81st minute.

Needing to just see the game out to advance, the United States defense locked down through the last moments and held France at bay. When the final whistle blew, the score line read 2-1 and the United States booked their spot in the semifinals where they will face England on Tuesday.

The @USWNT eliminated the hosts to reach their record 8th straight #FIFAWWC semifinals. All the highlights in our 90′ in 90″ ⬇️ #BelieveWithUS pic.twitter.com/PydkbJ7Nkd

It was supposed to be the match of the tournament before the team even arrived in France and it lived up to all the hype. Often time these affairs turn out to be underwhelming or duds altogether, but that was not the case between France and the United States who provided plenty of fireworks on Friday.

DREAM START FOR THE USA! 🇺🇸@mpinoe‘s free kick gets past everyone as the @USWNT takes an early lead once again! #FIFAWWC pic.twitter.com/K5oHYnCyvD

It was another double dose of goals for Megan Rapinoe on Friday against France and it was just enough to send the United States through to the semifinals. We may never know how her first goal made it through the swarm of bodies in front, but her second was a class finish to a great team passing play.

Diani is played in beautifully but Crystal Dunn recovers and slides in to block the shot! #FIFAWWC pic.twitter.com/Cyc3d9eS5B

One of the biggest questions coming into the match and into this tournament as a whole was Crystal Dunn’s play at right back. Dunn is not a defender by trade, but that’s where head coach Jill Ellis has been deploying her. Dunn’s performance against France may go down as the best showing on her career.

Stop us if you’ve heard this before. Renard with the header off a set piece. France are back in it. #FIFAWWC pic.twitter.com/DGdOzfDNLZ

As the rock of the France back line Wendie Renard was going to do everything in her power to make sure her side did not go down without a fight. Just when it looked like the United States was sailing into the semifinals, Renard headed home her fourth goal of the tournament to make things interesting.

A look at the 2019 FIFA Women’s World Cup bracket as it stands after Friday’s quarterfinal match.

Halfway through the quarterfinal round at the 2019 FIFA Women’s World Cup and we have our first semifinal matchup set in stone. England and the United States will meet in Lyon on Tuesday with a spot in the World Cup Final on the line.

Two teams have booked their places in the semifinals of the 2019 FIFA Women’s World Cup, and now it’s time to find out who will be joining them in Lyon. This is the only day of the quarterfinal round with two matches on the schedule, meaning we will know the second semifinal matchup by day’s end. First up, Italy and Netherlands do battle in a match of dark horses, then Germany meets Sweden for the final semifinal spot.

It’s already been a historic tournament for both Italy and the Netherlands to this point, but only one can make even more with a victory and a spot in the semifinals. Italy has been solid on defense and found an explosive offense to go with it, while the Netherlands has used some timely scoring to keep the wins coming. On paper, the Netherlands will be the favorite, but if Italy can get a lead that defense can wear you down over the course of a game.

Germany have been the most impressive team at the Women’s World Cup so far, but their schedule hasn’t exactly been filled with heavyweights. That’s not their fault though, they can only play who they matchup against, and so far they have beaten all challengers. What sticks out amongst all their success, is how they have done it without midfielder Dzsenifer Marozsan for most of the tournament. That play will need to continue with a stingy and opportunistic Sweden side waiting in the quarterfinals.

No goals from Alex Morgan but a brace from Megan Rapinoe means she joins Morgan and Ellen White on five goals apiece. This means the three top scorers at the 2019 FIFA Women’s World Cup will all be on the same pitch when England and the United States meet in the semifinals.