There are eight spots in the Quarterfinal round at the 2019 FIFA Women’s World Cup, and after Tuesday’s results, seven of those eight spots will be occupied by a European side. Italy and the Netherlands both made some more history in their respective matches, each winning their first ever knockout game at a Women’s World Cup. In the opening match, Italy dominated China on the way to a 2-0 victory while the Netherlands needed a 90th minute penalty to move past Japan. The two sides will meet now meet in the quarterfinals on Saturday.

Italy’s cinderella run at the 2019 FIFA Women’s World Cup will continue for at least one more game after the Azzurri scored early, then clamped down defensively for a 2-0 victory over China in the Round of 16.

Valentina Giacinti opened the scoring in the 15th minute, just moments having a goal taken away because of offsides. Giacinti started the play with a great tackle to take the ball away from the defender, then capped off the play by scoring after China was unable to clear the ball away from danger. China pushed back looking for a tying goal but were denied at every opportunity by the Italian defense or goalkeeper.

Shortly after the halftime break, the Italy lead was doubled when substitute Aurora Galli hit a hot low and hard that the goalkeeper could not reach. That was more than Italy needed in the end, keeping China off the board the rest of the way and sealing a spot in the quarterfinals.

With the victory, Italy claims its first knockout victory in Women’s World Cup history and move on to face fellow first time knockout winner Netherlands in the quarterfinals on Saturday. For China, this will be the first time they do not qualify for the quarterfinals in a tournament they have played in.

Italy picked up their first-ever #FIFAWWC knockout stage win as they cruised to victory against China.

Watch the full game highlights with our 90′ in 90″ ⬇️🇮🇹🇨🇳 pic.twitter.com/bBqUljiCw4

At some point, a dark horse is no longer a dark horse and we are rapidly approaching that territory with the Netherlands after they advanced to the quarterfinals with a 2-1 victory over two-time World Cup finalist Japan.

Lieke Martens is no stranger to making history at the FIFA Women’s World Cup and she added to that legacy on Tuesday. Back in 2015, Martens scored the first Dutch goal in Women’s World Cup history in their debut tournament. Fast forward four years and Martens in making more history, scoring a brace against Japan to send her side into the next round.

Martens opened the scoring in the 17th minute with a clever back heel deflection off a corner kick that nutmegged a Japanese defender in front and rolled across the line far post to give the Netherlands and early lead. Just before the half, Japan answered back with a goal of their own to bring the game back level. Yui Hasegawa finished off a beautiful team play with a clever chip over the goalkeeper to tie the game.

After Japan missed several chances to take the lead late in the second half, the Netherlands were awarded a penalty after a Japan handball in the box. It was Martens stepping up and coming through from the spot to send the Netherlands back in front and into the next round with her second goal of the match.

The Netherlands joined Italy in winning its first ever Women’s World Cup knockout match on Tuesday, and now they will face-off in the quarterfinals on Saturday. After back-to-back Women’s World Cup Final appearances, Japan sees its run end in the Round of 16.

The Netherlands win a nail-biter against Japan for their first-ever #FIFAWWC knockout stage victory.

Watch the full game highlights with our 90′ in 90″ ⬇️ pic.twitter.com/uzxYgdpTzc

Another day of big plays brought the Round of 16 to a close and helped push Italy and the Netherlands to the quarterfinals with their first ever knockout victories at a Women’s World Cup.

Here comes China! Wang Yan’s effort with the outside of the boot forces a great stop from Laura Giuliani. #FIFAWWC pic.twitter.com/NdPpo5e8RQ

It was a rather convincing performance for Italy in its victory over China, but who knows how things could have played out had Laura Giuliani not been able to get her hand on this shot to keep Italy in front in the first half.

WHAT A STRIKE! Aurora Galli doubles Italy’s lead with a low driven shot from outside the box. 2-0! 🇮🇹 #FIFAWWC pic.twitter.com/9IhfWeoyg3

In the two games she has started in France, Aurora Galli has no goals. In the two games where she has come on as a substitute, Galli has scored three goals. Her strike on Tuesday was brilliant, but might only be her second best goal of the tournament after her strike against Jamaica in the group stage.

Lieke Martens’ backheel flick nutmegs a defender on the way in for the 1-0 lead. #FIFAWWC pic.twitter.com/ODGAxrvzAj

Lieke Martens scored a brace on Tuesday, but it was her first goal that stands out. Off a corner kick, Martens flicks a back heel shot towards goal that nutmegs a Japanese defender and rolls in at the far post for an early Dutch lead.

Tuesday brings an end to the Round of 16 and our quarterfinal matchups at the 2019 FIFA Women’s World Cup are set. European squads claim seven of the eight available spots, with the United States being the only exception. 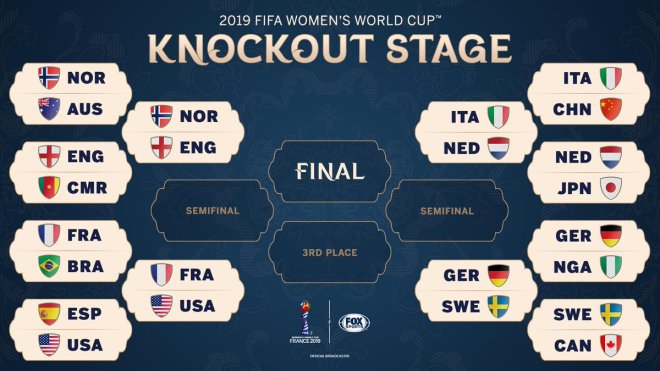 Round of 16 play is now in the books and our quarterfinal matchups are set. Eight teams survived, but before they can begin play in the quarterfinals, the tournament will take a day off on Wednesday before action resumes on Thursday with Norway taking on England with a spot in the semifinals on the line.

It’s always fun when a favorite meets a true dark horse contender this late in the tournament because that usually means both sides are playing their best soccer at the right time. That’s the scenario we have between England and Norway as they prepare to meet in the first quarterfinal match of the 2019 FIFA Women’s World Cup. England found a way past a physical Cameroon side while Norway needed a penalty shootout to make it here. Norway likes to go on the attack while England prefers to hit back on the counter. This should be an entertaining match to open up the next round of play in France.

Aurora Galli joins Italy teammate Cristiana Girelli in the Top 10 with her goal against China on Tuesday. After the Round of 16, seven players in the Golden Boot Top 10 will play in the quarterfinals.