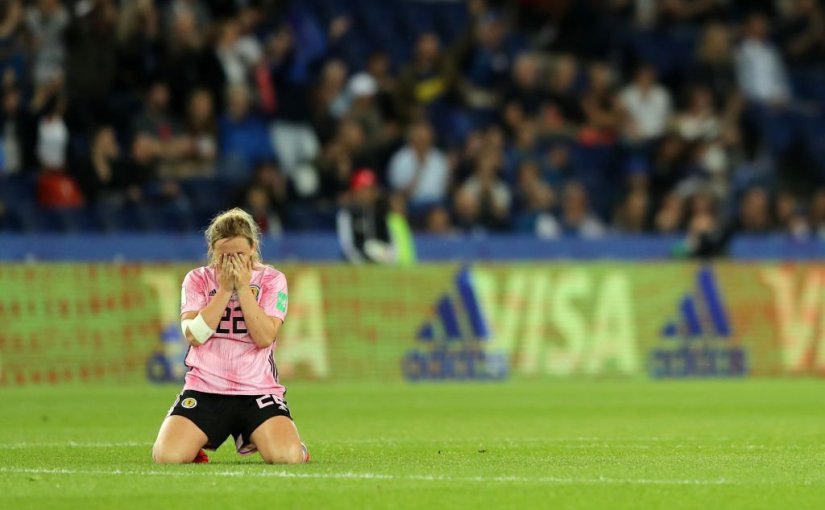 Group D was in action on Wednesday to complete its final round of group stage matches at the 2019 FIFA Women’s World Cup. England and Japan met with first place on the line and the Lionesses took care of business in a 2-0 win to claim the top spot. In the other match, Scotland looked to be in control and on its way to a Round of 16 birth before Argentina mounted a furious comeback to force a 3-3 draw and send Scotland out of the World Cup. Argentina remains alive with an outside shot at moving on to the Round of 16 pending Thursday’s outcomes.

England knew what they had to do on Wednesday against Japan to win Group D and they did more than enough to get the job done, even if it wasn’t always pretty. A draw would have sufficed for the Lionesses, but after an early save by goalkeeper Karen Bardsley, Ellen White struck twice and England prevailed 2-0 in their final group match.

White opened the scoring in the 15th minute, timing her run perfectly to connect with a through ball from Georgia Stanway and tapping it past an oncoming Japanese goalkeeper. Now needing two goals to win Group D, Japan ramped up the pressure and kept England on the back foot for a majority of the time remaining. They were never able to create anything especially dangerous, but the Japanese pressure prevented England from adding any insurance goals until late in the match.

With Japan applying heavy pressure, the only time England could attack was on the counter, and that’s exactly what they did to ice the game. Once again it was Ellen White doing the damage, sliding her second goal past the keeper to put the game away.

With the victory, England takes the top spot in Group D will all nine possible points in group stage play. They now move on to the Round of 16 where they will take on the third place finisher from Group B, E, or F. Japan will settle for second place and move on to face either Canada or the Netherlands.

England got their revenge on Japan thanks to a brace from Ellen White.

Scotland were 15 minutes away from likely clinching a spot in the Round of 16, then everything came crashing down in an instant. Leading 3-0 and looking comfortable against a seemingly overmatched Argentina squad, Scotland surrendered three goals in 20 minutes to crash out of the 2019 FIFA Women’s World Cup with a 3-3 draw.

For 69 minutes, Scotland was comfortably in front, but Argentina mounted a furious comeback to level the game in stoppage time and ultimately earn a draw. Milagros Menendez kept Argentina on life support with a goal in the 74th minute, then Argentina benefited from an own goal five minutes later to make it a one goal game.

In the waning minutes, Scotland made a tackle in the box that was ruled a penalty by VAR review. Florencia Bonsegundo stepped up but had her penalty saved by Lee Alexander. Another VAR review determined Alexander came off her line early, giving Bonsegundo a retake that she blasted home to give Argentina a draw and an outside shot of advancing to the Round of 16. With the result, Argentina become the first team in Women’s World Cup history to recover from a 3-0 deficit to record at least a point in the standings.

The draw was good enough to give Scotland its first ever Women’s World Cup point, but this match will only be remembered for their historic collapse that eliminates them from the tournament.

As for Argentina, they sit in the final advancing third place spot, but it is a precarious place to be with two games yet to play on Thursday. They will need both Cameroon/New Zealand and Thailand/Chile to end in a draw for them to advance.

UNBELIEVABLE. 🤯 For the 1st time in #FIFAWWC history, a team came back from a 3-goal deficit to get a draw.

Dueling top notch saves from the England and Japan keepers along with a historic goal for Argentina highlight the best of Wednesday’s action.

It could have been a much different result for England on Wednesday if not for this diving stop by Karen Bardsley in the opening minutes against Japan. That shot is on target and heading top corner but Bardsley gets just enough of a touch to knock it away.

Yamashita comes up with a big save on Duggan to keep this a one-goal game. #FIFAWWC pic.twitter.com/2ijy51K1Cp

Already trailing 1-0, Japan could not afford to see that deficit double if they had any hope of mounting a comeback and stealing the top spot in Group D away from England. Goalkeeper Ayaka Yamashita kept her team her side close with a desperation save off a header by Toni Duggan.

Safe to say Florencia Bonsegundo will never have to buy a brink in her home country again after her performance against Scotland. This was originally supposed to be her ‘first’ goal of the match but it was ruled an own goal by the Scottish keeper. Instead, we will go with her match winning penalty that kept Argentina alive to advance to the Round of 16.

Group D wrapped up play on Wednesday, here’s how they stand after three group matches:

England takes care of business to win the group, Japan slides into the second slot, and Argentina must stand by to see if they have done enough to move on.

Here’s a quick look at the third place standings:

Nigeria get a huge boost in its chances of advancing with Argentina’s comeback over Scotland. Cameroon, Chile, New Zealand, and Thailand all have an opportunity to advance with a win on Thursday.

Here’s how the knockout round bracket is shaping up after Wednesday’s matches: 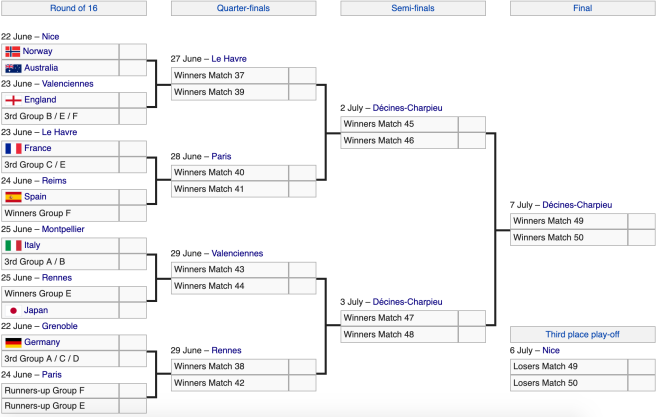 Matchday 3 wraps up with four matches that will decide once and for all who moves on and who is heading home. Netherlands, Canada, Sweden, and the United States are already booked for the Round of 16, they just need to decide who wins their respective groups. The real battle will be for third place spots, where Cameroon, New Zealand, Chile, and Thailand all remain mathematically alive to qualify for the knockout rounds.

If either nation can win this match by more than one goal, they should find themselves playing in the Round of 16. Both have a -3 goal differential entering the match, and Nigeria sits ahead of them with three points and a -2 differential. Expect some action both ways as the sides go for goal in an attempt to move on.

Easily the marquee match of Group E and they saved it for the final matchday. These were the two group favorites entering the tournament and it played out as expected. It’s a pretty simple scenario, a win by either team means they win the group, a draw gives the advantage to the Netherlands.

Like the match above, this was expected to be a meeting to decide the group and it played out perfectly. Sweden has been a thorn in the side of the United States in the past, coming away with a draw at the 2015 Women’s World Cup and eliminating them at the 2016 Summer Olympics. This match will all come down to whether or not the United States attack can find success against a historically stingy Swedish defense.

We’ve already seen the United States and Swede beat up on Thailand in France and Chile will have to do the same if they have any hope of making the Round of 16 as a third place side. Not only will they need all three points, they will also need to improve their -5 goal differential to jump a team like Nigeria ahead of them. Thailand is not mathematically eliminated from contention, but they would need an unprecedented result to advance.

Here are all the advancement scenarios for teams in Group E and Group F playing on Thursday.

Netherlands: Already advanced to the Round of 16. Need a win or draw against Canada to win Group E.

Canada: Already advanced to the Round of 16. Must defeat the Netherlands outright to take the stop spot in Group E. Draw or a loss means they will finish in second place.

Cameroon: Will need all three points against New Zealand and a better goal differential than Nigeria to move into a third place qualifying position. Loss or draw means they will be eliminated.

New Zealand: Same scenario as Cameroon above. Must win their match while erasing an inferior goal differential. Eliminated with a loss or draw.

United States: Already advanced to the Round of 16. A win or draw against Sweden means they win Group F and set up a meeting with Spain. A loss sends them to second place.

Sweden: Already advanced to the Round of 16. Must defeat the United States to win Group F. A loss or draw sends them through in second place where a showdown with either Canada or the Netherlands awaits.

Chile: Will need to defeat Thailand by a heavy margin to have a shot at moving on as a third place side. A loss, draw, or victory without erasing their inferior goal differential means they will be heading home.

Thailand: Not yet eliminated but need a victory over Chile and a draw between New Zealand and Cameroon. 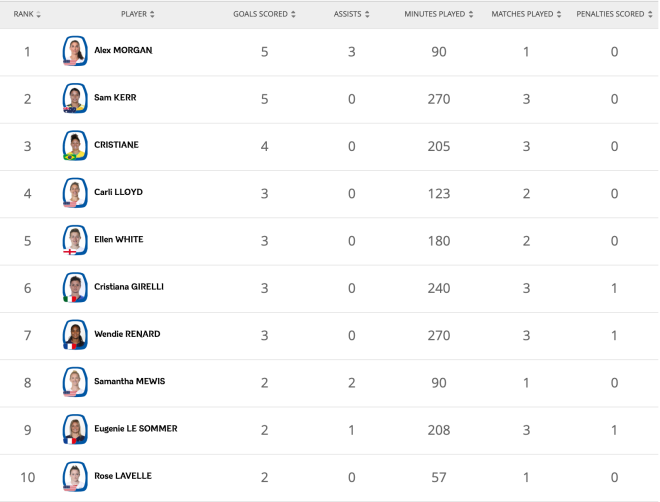 No change at the top, but Alex Morgan will get a shot to add to her overall total against Sweden on Thursday. Ellen White of England jumps up to #5 with her two showing against Japan.