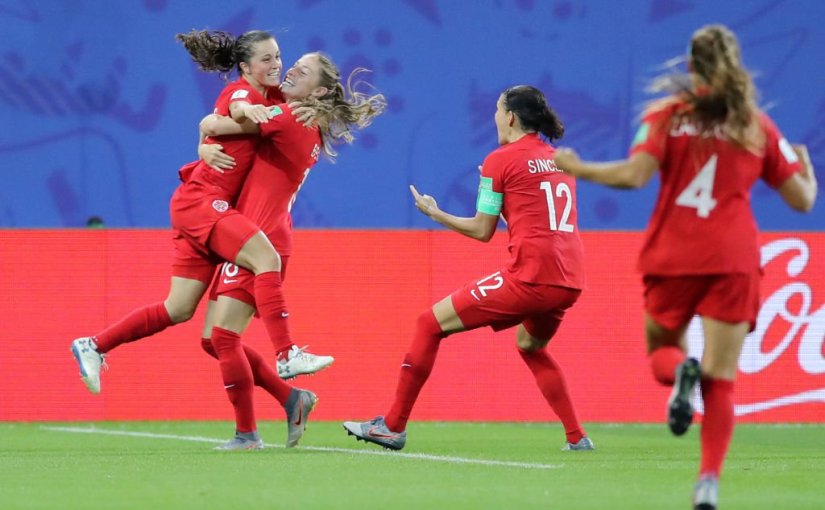 Saturday was Group E day at the 2019 FIFA Women’s World Cup with them and only them on the schedule. As expected, group favorites Canada and the Netherlands both prevailed rather convincingly in their matches to set up a decisive final group match between the two to decide who heads to the knockouts as group winner and who goes as the runner-up.

Entering France as a popular dark horse selection, the Netherlands has taken care of business in convincing fashion through its first two games of group play. A second dominating victory on Saturday saw the Dutch fly past an overmatched Cameroon side in Group E.

A brace from Vivianne Miedema opened the scoring then sealed the game all the while making her the highest scoring woman in Netherlands history. Cameroon did have a sliver of hope late in the first half, punching back and evening the score after Netherlands took the lead just minutes earlier. That good feeling did not much past halftime as the Netherlands retook the lead for good on a goal from Dominique Bloodworth.

With the Netherlands taking care of business against Cameroon earlier in the day, it was up to Canada to follow suit and they did just that with a dominating performance against New Zealand. Controlling over 2/3 of the possession allowed Canada to keep playing forward and take chances at goal and that strategy eventually paid off.

It took 48 minutes but the relentless Canadian attack broke through with Jessie Fleming scoring the only goal her side needed to claim the victory and all three points. Even with the lead, Canada continued to pressure and New Zealand never had the ball long enough to create anything for themselves. With 11 minutes remaining, Nichelle Prince closed the game out with an easy tap in goal following a shot off the post.

Goals from Jessie Fleming and Nichelle Prince sent Canada to the knockout stage of the #FIFAWWC.

Catch up on all the action with our 90′ in 90″ Highlights ⬇️ pic.twitter.com/G9TQ1Wkw4r

Back to our standard three plays after Saturday brought some big time highlights just not as many as we saw on Friday. Two goals from the early match and a save from the clutch save from the second make up today’s list.

Just two minutes after the Netherlands took the lead, Gabrielle Onguene beats the goalkeeper to the ball and levels the score for Cameroon. pic.twitter.com/DnW96pVIYi

Two minutes after falling behind, Onguene brought Cameroon back level with this goal that saw her head the ball around the goalkeeper to set up an easy tap into an empty net.

She sealed the Oranje’s victory over Cameroon and became the top scorer in Netherlands National Team history all in one strike 🇳🇱 pic.twitter.com/o5YJuoixMV

This goal by Miedema was her second of the day and provided some insurance for the Dutch on their way to victory over Cameroon. It also put Miedema in the history books as the leading womens goal scorer in Netherlands history.

Nichelle Prince almost makes it 2, but Erin Nayler comes up BIG to keep it 1-0. #FIFAWWC pic.twitter.com/d8Qp1wWoPo

Canada got the win but New Zealand goalkeeper Erin Nayler gets the spot in our best plays from Saturday for her diving save off a header from Nichelle Prince to keep her side in the game late.

Only Group E was in action on Saturday and its pair of matches went about as expected, setting up a critical Matchday 3 that will decide the fate of all teams involved.

Everything went according plan on Matchday 2 in Group E which means Canada and the Netherlands will meet on in the final group game on Thursday to determine who wins the group. Should they draw, the Netherlands take the top spot based on ‘goals for’ tiebreaker.

Sunday marks the final day of Matchday 2 of group play at the 2019 FIFA Women’s World Cup and we have a pair of Group F matches on tap to close it out. Before their big showdown later in the week, Sweden and the United States must take care of some other business first.

It took Sweden until the very end, but they managed to pull out a win against Chile in their opening match. Now they get Thailand who is reeling from a 13-0 drubbing by the United States, but should be motivated to bounceback and prove they belong in this tournament.

No question the United States made a statement in its opening match with Thailand but now they must shift focus to a Chile side who gave Sweden all it could handle. Head coach Jill Ellis is expected to make some changes to her lineup and bring some fresh faces into the fold for the match where the United States will still be heavy favorites regardless of who is on the pitch.

Not much change from Friday expect for Vivianne Miedema breaking into the top-10 with her two goal effort against Cameroon.

One thought on “Women’s World Cupdate: No Surprises Here”