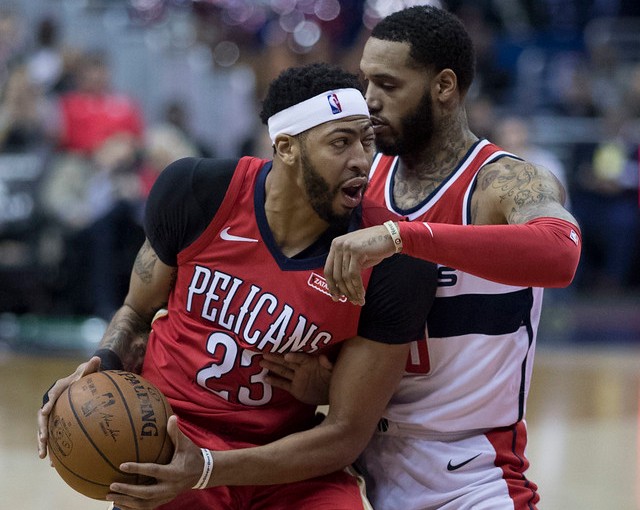 Just two days after the Toronto Raptors defeated the dynastic Golden State Warriors to win the NBA Finals, the first–and biggest–trade of the young NBA offseason has happened. The New Orleans Pelicans sent star Anthony Davis to the Lakers for quite a haul.

The trade is fascinating both teams. LeBron James will turn 35 during the 2019-20 NBA season and AD will be the best player LeBron has ever played with. The price the Lakers paid seems insane at face value, but it really seems like both teams made out in this deal. The Lakers now have two legit superstars; the Pelicans now have the No. 1 and No. 4 picks in Thursday night’s draft, several young players, plus draft picks to help in add to the team in the coming years.

If you’re wondering if Lonzo’s dad is mad, the answer is yes.

The Lakers are in win-now mode

It’s impossible to look at this without considering LeBron’s age. If the Lakers don’t get another star player, was getting LeBron even worth it? Clearly LeBron playing with younger, undeveloped talents didn’t work out so well for the Lakers last season. LeBron probably only has a few good years left, so the Lakers can’t afford to draft and develop players over several years. Davis makes the team instantly better and automatically a contender in the Western Conference.

Davis will re-sign with the Lakers in 2020

It’s already being reported that Davis will sign with the Lakers when he becomes a free agent next summer. The Brow is only 26, and could be the next superstar big man for the Lakers, as well as a guy they can build around whenever LeBron decides to hang it up. It’s hard to imagine the Lakers giving away so much for a one-year rental and it’s no secret that Davis has wanted to go to L.A. for some time now. Unless he and LeBron have a monumental falling out over the next year, he’ll be a Laker for years to come.

Now’s the time to strike in the Western Conference

The dynamics of the Western Conference have shifted dramatically in the last five days, beginning with Kevin Durant tearing his Achilles tendon in Game 5 of the Finals and Klay Thompson tearing his ACL in Game 6. Durant was expected to be the biggest name in free agency. There’s been endless speculation about where he would sign. Now it’s possible he’ll miss all of the 2019-20 NBA season and Achilles’ injuries are notoriously difficult to recover from.

There’s now uncertainty as to whether Durant will become a free agent at all–he has a $31.5 million player option with the Warriors for 2019-20. Durant could choose to forego free agency now and spend the next year rehabbing on the Warriors’ dime.

Thompson is also a free agent this offseason, though there was little doubt that he’d re-sign with Golden State. His father confirmed that Klay will be back.

The injuries have made the Warriors’ future murky and bring up a ton of questions regarding the salary cap and luxury tax.

The Warriors dynasty may not be totally over, but it’s hard to see them going very far next season based on their current situation. Thompson will miss time recovering from his ACL tear. KD might get paid to not play for the Warriors next year. DeMarcus Cousins is a free agent. Steph Curry may be the greatest shooter in NBA history, but he can’t win the Western Conference singlehandedly.

Future first-round picks may not be as valuable

If the Lakers can do anything in the next few years, the future first-round picks will automatically be less valuable. It’ll be interesting to see where the team is in a year’s time and where its first-round pick will be; if they can manage a playoff run, that pick will be in somewhere in the 20s. Some people are acting as though those first-round picks are too valuable to part with, but they aren’t for a team like the Lakers. It’s rare for draft picks to be a sure thing while Anthony Davis is already a proven talent.

Simply put, the Lakers aren’t done making a splash this offseason. Free agency is just two weeks away and L.A. is now a premier landing spot for impending free agents. It’s anyone’s guess who they’ll sign; there’s been speculation involving the Lakers and everyone from Kemba Walker to Jimmy Butler to Kyrie Irving.

The Pelicans just got so much more interesting

The Pelicans already had the No. 1 pick in the draft, and they’re certain to take Zion Williamson, the 6’7″, 285 lb. freak athlete/forward from Duke. Williamson is the most hyped prospect since LeBron in 2003. New Orleans now also has a the No. 4 overall pick, which could be used as a trade chip or to land another highly regarded prospect. It’s easy to wonder if they could dangle the No. 4 pick and a player to the Knicks to move up a spot to take Williamson’s Duke teammate R.J. Barrett with the No. 3 pick.

The Pelicans also now have a pair of recent No. 2 overall picks in Brandon Ingram and Lonzo Ball, who were integral to the deal. New Orleans also still has Jrue Holiday, who posted a career-best 21.2 points per game in the 2018-19 season. The Pelicans could be a contender much more quickly than anticipated and it’s hard to see David Griffin as anything but a damn genius; his team won the draft lottery/Zion sweepstakes and he used the Pelicans’ biggest asset to net a fantastic return. Davis didn’t want to be in New Orleans any longer and was going to walk next year anyway. Now Griffin can use that return to build around a generational talent.

The NBA offseason has only just begun…

…and it’s already freaking insane. The draft is a mere five days away. Free agency begins at 6 p.m. on June 30th. The KD and Klay situations have already been discussed, but there are plenty of other big name players who will hit free agency in two weeks. Reigning Finals MVP Kawhi Leonard, Kyrie Irving, Kemba Walker, Jimmy Butler, DeMarcus Cousins, and Khris Middleton will all be free agents, among others. This is looking to be one of the most fascinating offseasons in recent NBA history and it could reshape the league for years to come.