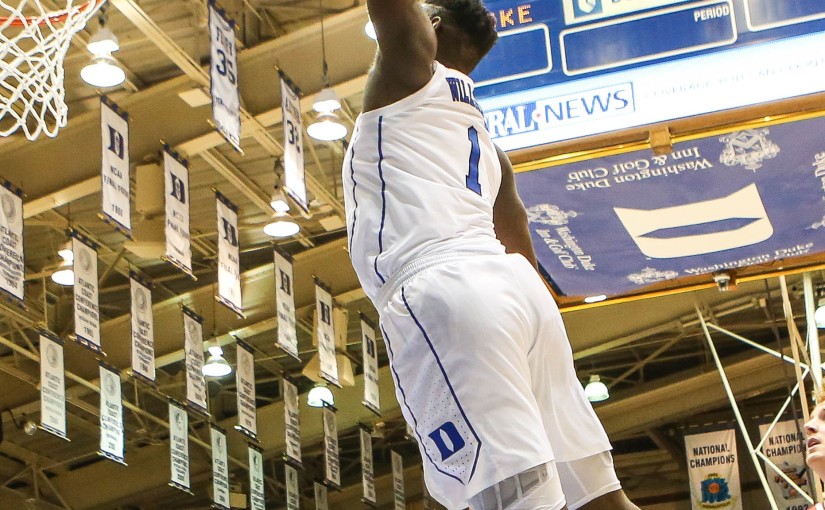 Last night, Duke played Virginia Tech in the Sweet Sixteen. For the second time in five days, Duke looked beatable and won by virtue of the basketball skirting the rim at the buzzer.

While Tre Jones had himself a night–22 points and 5-of-7 from 3–Zion Williamson was still the story of the game.

Despite being the leading scorer of the game with 23, Zion’s most memorable play came on defense and resulted in a four-point swing. With under six minutes remaining, Duke had a 3-point lead. The Hokies got the ball after an abysmal possession by the Blue Devils. Hokie guard Justin Robinson stormed to the basket, thought he had Zion beat, but Zion recovered quickly, jumped up and still made the block. This allowed Jones to grab the ball and make a pull-up 2, bringing the score to 66-61.

Earlier in the game, Zion also did this:

You can watch all Zion related highlights here:

While it brings no pleasure to most of the country to watch Duke win games in March, it’s hard not to enjoy watching Zion play. Pitt head coach Jeff Capel, who helped recruit Zion while still an assistant at Duke, said earlier this year off Williamson’s play, “I don’t know if I’ve seen anything like it in my time of coaching.” It’s hard to recall anyone dominating the college game in quite the way Zion has done this season.