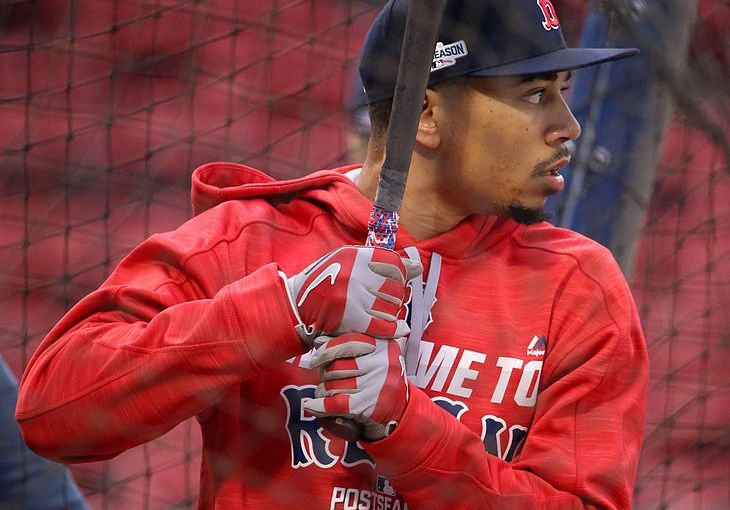 2019 forecast:  The Blue Jays still have a long way to go to get back to being as good as the teams that went to the ALCS in back-to-back years in 2015 and 2016. This season will probably be another losing season as they attempt to rebuild. The Blue Jays have the best prospect in baseball, Vladimir Guerrero, Jr. in Triple-A right now. The 19-year-old phenom will likely be called up to the big league club in June. He’s currently battling a strained oblique, though the Jays weren’t planning on calling him up to start the season anyway because he’s “not ready” for the big leagues yet (also known as “excuse for service time manipulation”). The Blue Jays are certainly hoping starting pitcher Aaron Sanchez has put the finger issues that sidelined him the past two seasons behind him. They need more stability in their rotation behind Marcus Stroman, particularly following their trade of J.A. Happ last year.

Look out for:  The most exciting thing about the Blue Jays this year is the guy who will start his season 100 miles south of Rogers Centre. Vlad Jr. has dominated at every level of the minors and will single-handedly make the Jays a more entertaining team.

2019 forecast:  Well, it can’t be worse than 2018…can it? The 2019 O’s will likely not fare much better than last year’s team did. They are in full-on rebuild mode and have a low-ranked farm system. They simply won’t be much fun to watch this year. Chris Davis will certainly be looking to prove something after one of the worst seasons ever by a major league player. Davis struck out nearly 37% of the time and had an OPS of .539. Watching Davis attempt to hit above the Mendoza line could be entertaining? It’s tough to imagine this team finishing anywhere but last in an AL East that had three 90-game winners last season.

Look out for:  Closer Mychal Givens just might be the most exciting part of this year’s Orioles. While his numbers went down as a whole last year, he didn’t allow much hard contact and kept opponents scoreless in 18 of his last 21 appearances.

2019 forecast: The Rays had a surprisingly good 2018, which few people saw coming. They traded pitcher Chris Archer to the Pirates for pitcher Tyler Glasnow, outfielder Austin Meadows, and pitching prospect Shane Baz. Meadows will start in right field to start the year and Glasnow, who never found his groove in Pittsburgh, looks to be one of the Rays’ starters in 2019. Tampa began using openers last season, which worked to their benefit and is a great example of outside-the-box thinking that small-market, low-payroll teams must employ to stay competitive. And stay competitive they did, winning 90 games in a division that boasted the two best teams in baseball last year. They were buoyed by pitcher Blake Snell’s excellent season, which landed him the AL Cy Young Award. Unfortunately for the Rays, their 90 wins weren’t enough as the A’s won 97 and landed the second Wild Card spot. The Rays won’t have an easy go of it this year either, as the Red Sox and Yankees are still two of the best teams in baseball. The Rays will be interesting to watch, as they continue to experiment with openers, something that could have ramifications across the league.

Look out for: Austin Meadows will begin his first full season in the majors. With consistent playing time, he could develop into a solid player and become a centerpiece for the Rays over the next several years.

2019 forecast:  The reigning World Series champs somehow aren’t favorites to win the 2019 World Series, but they’re still stacked, losing very few players from last season. The most noticeable change is at the closer position, with Craig Kimbrel leaving in free agency and Matt Barnes slated to take over the position this year. They managed to re-sign a couple of their own free agents, including World Series MVP Steve Pearce and starting pitcher Nathan Eovaldi. The starting outfield from last season will return, featuring AL MVP Mookie Betts, Andrew Benitendi, and Jackie Bradley, Jr. J.D. Martinez is back at DH, and Xander Bogaerts returns at shortstop. Betts led all major leaguers in fWAR last season, and Martinez and Bogaerts both finished in the top 30; Benitendi missed the top 30 by 0.1. Veteran second baseman Dustin Pedroia will start the year on the injured list, but could return before the end of April. The Red Sox recently announced a six-year extension for their ace, Chris Sale. While they may not top last year’s record, they’ll still be one of the top teams in the league. With the best leftie in the game leading their rotation, and most of the same cast returning from last year’s championship team, the Red Sox will be one of the best teams in baseball yet again.

Look out for:  Mookie Betts is the most fun player to watch in all of baseball. Mike Trout may be better overall (though he wasn’t last year), but Mookie just looks like he’s having a blast out there. It’ll be hard for him to top his excellent MVP season, but watching him try promises to be entertaining.

2019 Forecast: The Yankees (along with the Astros) have the best odds to win the 2019 World Series. Winners of 100 games in 2018, it’s easy to see the Yankees again being one of the best teams in baseball. They have perhaps the best bullpen in the game, featuring closer Aroldis Chapman. They traded for Zack Britton last season, and signed him to a contract during the offseason. Adam Ottavino also joined the Yanks’ pen. The signing didn’t get much hype, but Ottavino was excellent with the Rockies last year, with a 12.98 K/9 rate. James Paxton came to the Bronx via a trade with the Mariners and he’ll likely fill the 2 or 3 spot in the rotation. The busy offseason also saw the Yankees re-sign some of their own free agents, including pitchers CC Sabathia and J.A. Happ, as well as veteran outfielder Brett Gardner. Injuries could be a problem early on, as the Yankees have several key players who won’t see the field on Opening Day. Their ace, Luis Severino, is working back from rotator cuff inflammation in his right shoulder and likely won’t make a major league start until May. Centerfielder Aaron Hicks is experiencing lower back tightness, but is expected to play in early April. Shortstop Didi Gregorius is still rehabbing after Tommy John surgery in October and won’t see the field until the summer months. However, the Yankees are a deep team, so they should still be in it as they await the return of the above players. The main thing the Yankees should be concerned with is not allowing the Red Sox to build an insurmountable lead in the division, as they did last year.

Look out for: It’s hard to say a 38-homerun season is a down year, but considering Giancarlo Stanton had 59 in his 2017 MVP season with the Marlins, there’s no doubt some Yankees fans were disappointed with Stanton’s freshman year in the Bronx. Stanton’s slugging percentage fell over 120 points from 2017 to 2018 (to be fair, he still slugged .509 last season). We’ll see how he fares in his second season at Yankee Stadium.

The Red Sox are just too good to pick against. Almost all of their key players are returning this season. Repeating as World Series champions is always difficult, but repeating as AL East champs is a reasonable expectation for a team that won 108 games a year ago.