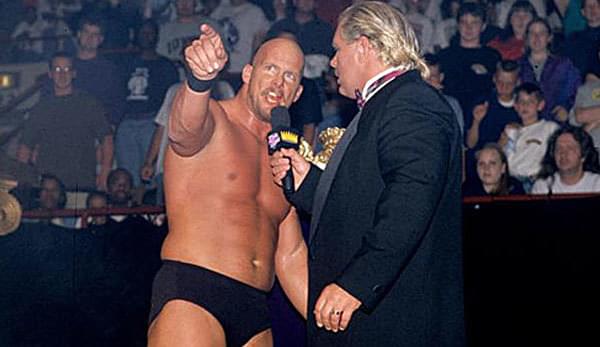 Thanks to an iconic quip from “Stone Cold” Steve Austin, almost 23 years ago, the numbers 3 and 16 are very closely associated with him, at least in WWF/WWE canon and also in some wrinkles of pop culture. While Austin was working heel (bad guy) at that time, the seeds of his future anti-hero character were sown with this very promo.

Austin, having just beaten Jake “The Snake” Roberts, whose character was that of a born-again Christian – mirroring Roberts in real life at that time – Austin mocked Roberts’ recital of Bible passages in promos with the historic line.

If you know the background of this moment, it’s a trip down Memory Lane. if you don’t know anything about the sport, then it’s the explanation as to why you saw a lot of “Austin 3:16” shirts in the late 1990s … And probably yesterday.

The language is borderline NSFW, so if you bask in the nostalgia … Maybe don’t have the little ones around.

And when the 20th anniversary of the moment came in 2016, WWE was there with a tribute from some in the locker room at that time. Props to Kofi Kingston and Karl Anderson for practically nailing the voice.