College football season is right around the corner and that means it is time to preview the year. The Bat Flip’s 2018 college football preview will feature several different conference previews along with a comprehensive preview looking at the entire season. If the past few seasons are any indication, 2018 should be filled with drama and chaos until the very end when Alabama wins another National Championship.

Our college football preview continues with the Pac-12 taking its turn through the preview lineup. Shutout of the College Football Playoff last season, the Pac-12 features a trio of teams looking to represent the conference on the game’s biggest stage at the end of the season. Based on the preseason polls, Washington is the early favorite to win the conference and potentially make the playoff but Stanford and USC also have title aspirations.

Based strictly on the eye test, the North division of the Pac-12 looks to be the stronger of the two divisions especially if Oregon continues to rebuild its program. Down in the South division, defending conference champion USC will be the preseason favorite but all told the division appears to be wide open for the taking. If a team like Utah or Arizona can put it all together it is entirely possible we see a non-traditional power playing for the title.

Everything you could possibly want to know about the Pac-12 in 2018 is included in our conference preview, beginning with a breakdown of all twelve schools.

Twelve schools makes up the Pac-12 conference with teams being split into two divisions of six schools a piece. The divisions are as follows:

Each team will play everyone in its division along with four sides from the opposite division for a total of nine conference games during the 2018 season. Once the regular season ends, the winner of the North division and the South division will face off at Levi’s Stadium in Santa Clara for the Pac-12 Championship.

2018 Outlook: A solid start last season had California dreaming of a bowl appearance but a bad showing in conference play derailed its season and left them on the outside looking in. Justin Wilcox now enters his second season with 18 starters returning and eyes on taking the Golden Bears bowling for only the third time this decade. 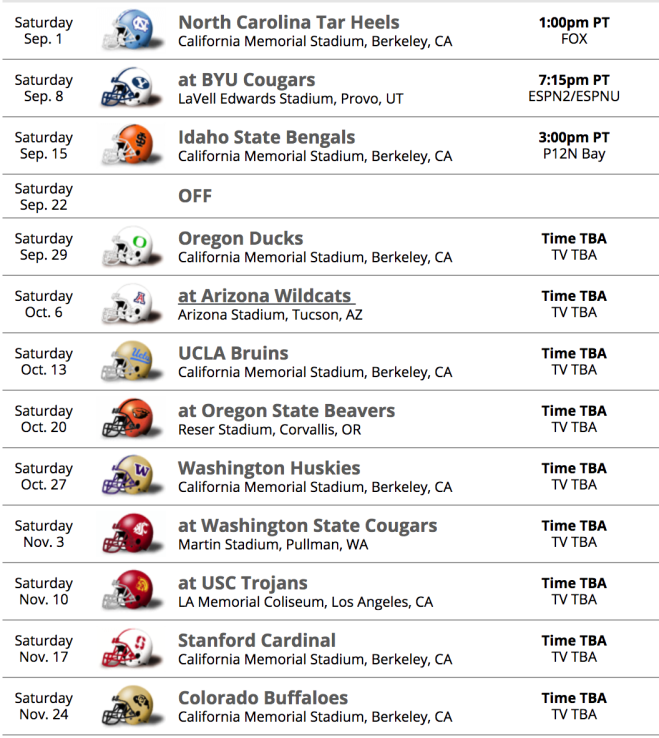 2018 Outlook: A few lean seasons may be a thing of the past for the Ducks as they look primed for a breakout season under first year head coach Mario Cristobal. Starting quarterback Justin Herbert is healthy and ready to lead a potent offense that averaged over 50 points with him behind center. Washington and Stanford will be the preseason favorites, but this Oregon side could turn a few heads in 2018.

2018 Outlook: Safe to say things could not have gone much worse for the Beavers last season as bowl dreams quickly evaporated following a 1-5 start. First year head coach Jonathan Smith faces some hurdles in taking over the Beavers but expectations will be low so he has time to rebuild the program without too much pressure on his shoulders.

2018 Outlook: One of the most consistent teams in college football is back and has another 10 win season, and perhaps more, on its mind in 2018. Heisman favorite Bryce Love returned for his senior season and should put up massive numbers on the ground once again. The schedule does Stanford no favors (away to Oregon, Notre Dame, and Washington), but The Cardinal have the talent to get the job done on any given Saturday.

2018 Outlook: Coming off a slight backwards slide following a playoff appearance in 2016, Chris Petersen and the Huskies are ready for a return to national prominence. They will enter the 2018 season as co-favorites with Stanford to win the North. If things go plan, Washington should be playing in its third straight major bowl game with hopes of playing for much more come the new year. 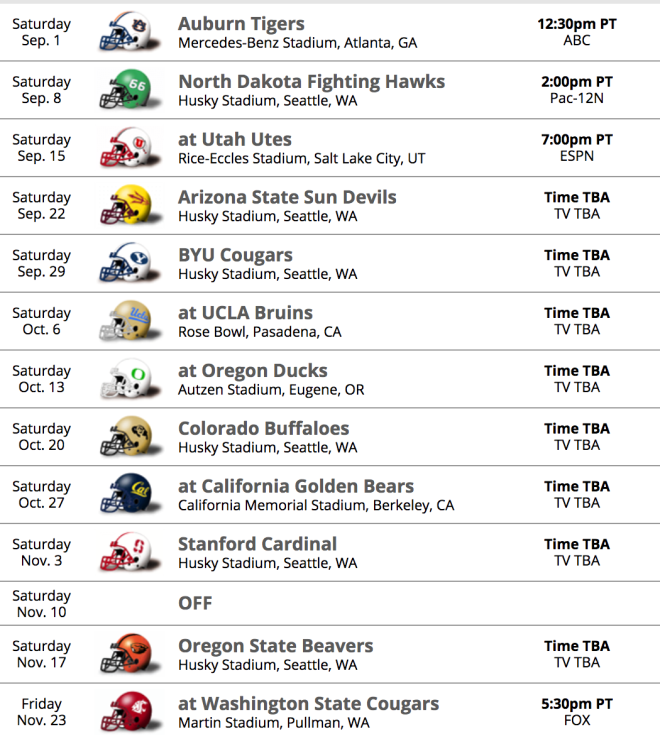 2018 Outlook: A lot of talent left the Cougars program in the offseason so Mike Leach will have his hands full trying to replicate the success of 2017. Pac-12 career passing leader Luke Falk has moved on but expect more Air Raid from the Cougars regardless of who replaces him. If you want to watch some enjoyable late-night college football, Washington State is a pretty safe bet. 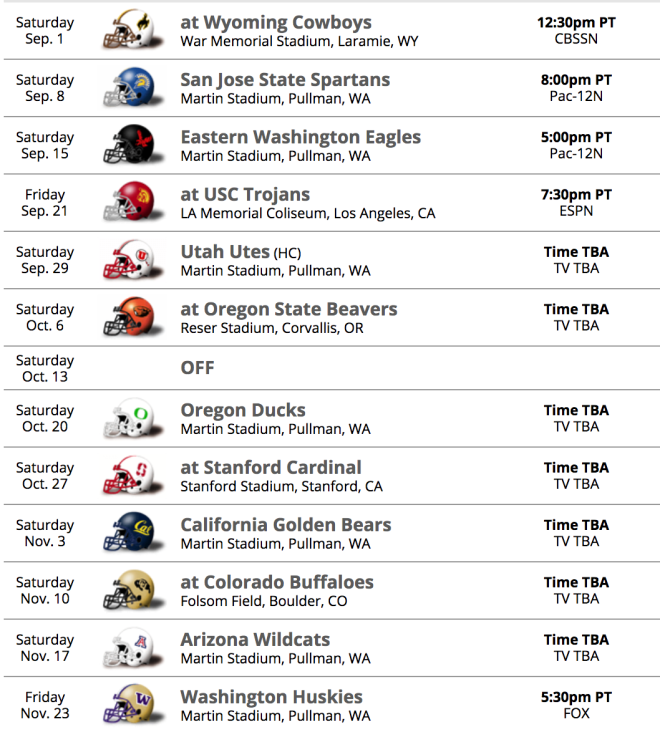 2018 Outlook: Don’t let their Pac-12 South finish fool you, the Sun Devils were a very much flawed team who just so happened to play in a very week conference division last season. First year head coach Herm Edwards was one of the most interesting college hires in a long time. It will be worth keeping an eye on Tempe to see what he has cooking for his first college coaching stint. 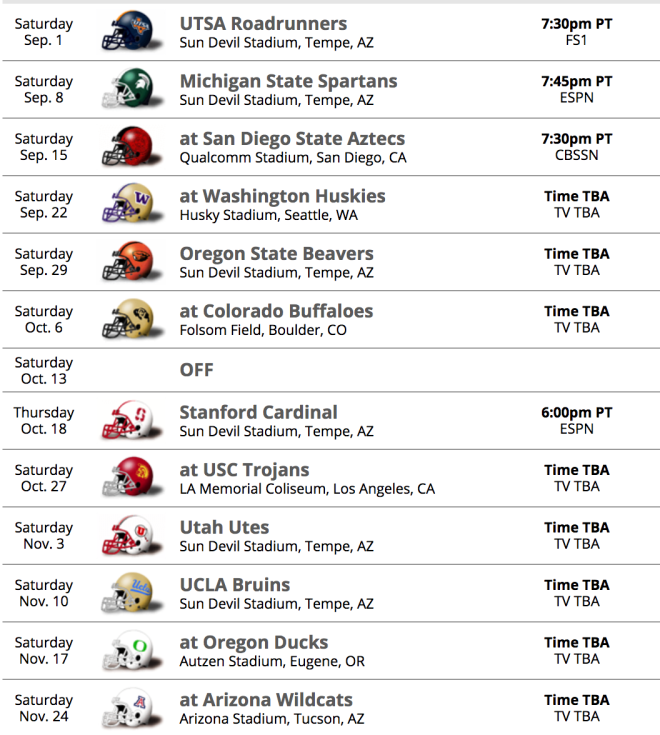 2018 Outlook: Arizona will be worth watching just to see what quarterback Khalili Tate does for an encore after bursting onto the scene last year. Tate is a potential Heisman finalist and playing in new head coach Kevin Sumlin’s system should help him put up some major numbers. The South division could be a wide open race and the Wildcats have a chance to make some noise in 2018.

2018 Outlook: A rebuilding year in 2017 saw the Buffaloes fall just a win shy of bowl eligibility. With a year of experience under their belt, Colorado will look to return to bowl play this season. Playing in a wide open division should play to their advantage where a few minor upsets could see them making a return trip to the Pac-12 championship game.

2018 Outlook: Chip Kelly makes his long awaited return to the college game as head coach of the UCLA Bruins. Kelly’s glory days from his time at Oregon are hard to forget but don’t expect an immediate return to glory for the Bruins under the new boss. The schedule is brutal and the team is adjusting to an entirely new system on both sides of the ball.

2018 Outlook: Replacing Sam Darnold will be a major factor is how much success the Trojans have in 2018. They will enter the season as the South division favorites but back-to-back road games against Stanford and Texas in September will show just how serious of a national threat this side really is. If they can survive to October, the schedule lightens up considerably and anything is possible.

2018 Outlook: Drawing Washington, Stanford, and Oregon from the North almost seems unfair for Utah but they will have the talent to keep up with the heavyweights of the Pac-12 after a struggle last season. Pulling a few upsets along the way could put the Utes into their first Pac-12 title game in history.

Washington v. Auburn (September 1st): A meeting of two national title contenders on the opening week of the season in Atlanta. You cannot ask for much more than that.

Stanford v. USC (September 8th): This will be the first real test for either of these sides and very well could be a Pac-12 Championship preview regardless of the result.

Washington v. Oregon (October 22nd): If Oregon hopes to reign supreme in the North then this will be a game they have to win in order to do so.

Washington v. Stanford (November 3rd): This matchup could very likely be a Pac-12 Championship semi-final to determine which side wins the North and which side has to settle for second.

USC v. Notre Dame (November 24th): One of the oldest rivalries in college football has delivered some spectacular games in the past. If things break right, this contest could have national implications.

It would not be a preview post without making some season predictions that will surely be wrong before the calendar hits October. Here is the Bat Flip’s official 2018 Pac-12 football predictions.

That’s a wrap on our 2018 Pac-12 football preview. Stay tuned throughout the week for more conference recaps along with a special college football preview episode of The FlipCast coming later in the week.