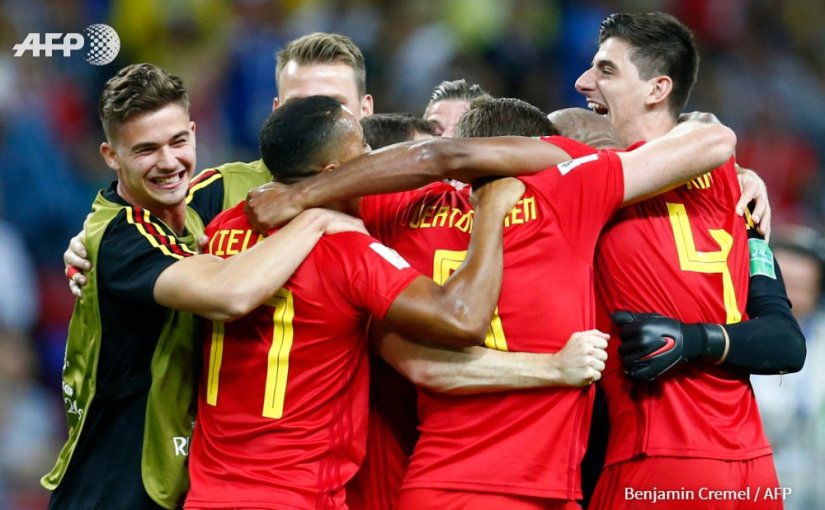 Coming into the Quarterfinals of the 2018 FIFA World Cup, eight sides remained alive, six from Europe and two from South America. Four European sides on the right side of the bracket meant Europe was guaranteed a shot at a fourth straight World Cup title. Following Friday’s action, Europe is now guaranteed a fourth straight World Cup title after France and Belgium eliminated South American sides Uruguay and Brazil respectively.

Now six team remain with two quarterfinal matches still to play on Saturday, but we do know it will be an all affair European the rest of the way. France are beginning to look like the team everyone expected in a 2-0 beating of Uruguay while Belgium sent Brazil’s hunt for a sixth star down in flames by a score of 2-1 in Friday’s second game.

Everything you need to know about Friday’s action can be found in this World Cupdate.

France is back in the World Cup semifinals for the first time since 2006 following a 2-0 victory over Uruguay on Friday. Goals from Raphaël Varane and Antoine Griezmann were more than enough to push Les Blues through to the next round.

Hugo Lloris made a spectacular diving save late in the first half to keep France in front and Uruguay never looked threatening going forward the rest of the match. Missing Edinson Cavani meant more of the burden fell on the shoulders of Luis Suárez but he could never solve the France defense.

This could very well be the end for a very good generation of Uruguay players on the international stage but how it all shakes out remains to be seen. France on the other hand, are into the semifinals as the youngest team in the tournament and are looking like a champion in the making.

France got goals from Varane and Griezmann AND kept the shutout to advance to the semifinals.

Watch the highlights of Uruguay vs France in our 90′ in 90″ ⬇️ pic.twitter.com/Zru12sAcxZ

For this golden generation of Belgium football, this quarterfinal match with Brazil was the biggest game of their lives. Having never advanced beyond the quarterfinals in any major international competition, Belgium knew it needed a win or waste maybe its greatest generation of players ever.

An own goal by Brazil coupled with a KEvin De Bruyne laser beam on the counter-attack pushed Belgium to a 2-0 lead in the first half. On the brink of its second ever trip to the World Cup semifinals, Belgium locked down on defense in the second half. Brazil was able to pull one goal back with 15 minutes remaining, but Belgium and Thibaut Courtois didn’t blink to hold on for the 2-1 victory.

With the win over Brazil, Belgium now advance to the semifinals where they will meet fellow European side France on Tuesday. Brazil head home, still sitting on five stars and the next opportunity they get in 2022, it will be 20 years since its last World Cup title.

Brazil vs Belgium lived up to the hype.

Watch all of the highlights in our 90′ in 90″ ⬇️ pic.twitter.com/LUjWuzXKfr

That does it for the first day of Quarterfinal action from the 2018 FIFA World Cup with France and Belgium advancing on to the Semifinals on Tuesday. Saturday sees another pair of Quarterfinal matches as two more teams will keep their World Cup dreams alive for at least one more match.

There were enough goals on Friday to make a top three but there were also two spectacular saves that absolutely need highlighted. For that to happen, we will be adjusting our segment to highlight the best plays from Friday rather than just the goals.

Trailing 1-0 in the first half, Uruguay had an opportunity to equalize just before halftime but France goalkeeper Hugo Lloris had different ideas. A dangerous free kick was sent into the box where it found the head of a Uruguay attacker but Lloris made a fantastic stretch to reach the ball before it could find the net.

What a save by Hugo Lloris!

No one knew it at the time, but this thunderbolt from Kevin De Bruyne turned out to be the goal that put Belgium into the World semifinals for the first time since 1986. Finishing off a brilliant counter-attack, De Bruyne smoked the ball hard and low past the goalkeepers reach for a 2-0 lead.

The counter attack was brilliant, but let’s take another look at that STUNNER by Kevin De Bruyne 😍😍 pic.twitter.com/ZUbd611bXe

If De Bruyne’s strike was the goal that put Belgium in the semifinals then this save by Thibaut Courtois was the nail in the coffin for Brazil. Deep into stoppage time, Neymar took a shot from outside the box that was curling in for an equalizer before the big Belgian goalkeeper got a touch on it to push it over the bar.

Check back tomorrow for more great plays from the 2018 FIFA World Cup.

For the third time this World Cup, there was a fail so egregious that it had to brought to everyone’s attention. Already trailing 1-0 to France in their quarterfinal match, the margin for error for Uruguay was zero. Unfortunately, Uruguay goalkeeper Fernando Muslera committed a true howler off a shot from Antoine Griezmann that allowed France to cushion its lead and eventually win the match.

If there is any silver lining for Muslera (there isn’t) it is in knowing that this fail did not end up being the deciding goal in the end.

Match-day 1 of the Quarterfinals is in the books and one Semifinals match is set between France and Belgium on Tuesday. Both teams are guaranteed two more games at the 2018 FIFA World Cup with the Third Place match in play. Saturday’s matches will determine the second Semifinals match scheduled for Wednesday.

Saturday marks the second day of Quarterfinals play at the 2018 FIFA World Cup with two matches on the schedule, just like Friday. In the first match, Sweden and England will meet with both sides looking to end long Semifinals droughts. The second match will see Russia try to continue its fairytale run through its home tournament while Croatia look to spoil the party and head to its first Semifinals in 20 years.

England and Sweden are both ending long Quarterfinals droughts in this game and both will be looking to end long Semifinals droughts with a victory. Sweden suffocated Switzerland in the Round of 16 and advanced thanks to a Emil Forsberg tally in the second half. England ended a history of futility in penalty kick shootouts by beating Colombia 4-3 after ending the game tied at one goal a piece. Both sides will be at full strength in their attempts at history on Saturday.

Somehow, someway, Russia is still alive in its home World Cup after eliminating Spain on penalty kicks in the Round of 16. Entering the tournament as the lowest ranked side in the field, Russia has shattered all expectations and is on the brink of its first Semifinals appearance since the Soviet Union days. On the other side is Croatia, looking to make its second Semifinals since becoming an independent nation in the ’90s. It’s hard to say how fatigue could impact this match as both teams needed extra time and penalties to get here.

Only major change to The Golden Boot standings is Antoine Griezmann hopping into the Top-10 courtesy his second half goal on Friday. Harry Kane remains on top and has a huge opportunity to put a stranglehold on the award with another big performance on Saturday.