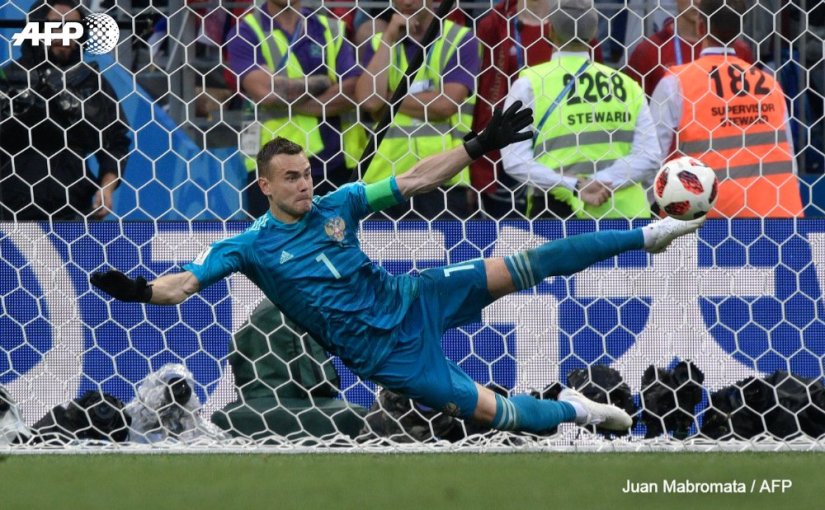 Underdog stories are a part of what make sports so great. It’s a reason a lot of us will tune into a sporting event we have no interest in, for a chance to see the seemingly impossible happen. That underdog story at the 2018 FIFA World Cup just happens to be the home side, Russia. Coming into the tournament, Russia were the lowest ranked side out of all 32 participating nations.

Since its opening game, Russia have looked anything like the 70th ranked team in the world and now they will continue the story in the quarterfinals following a shocking upset over Spain in the Round of 16. It was not pretty but it does not always have to be. Russia knew what it needed to do and executes its game plan perfectly. Now they will play for a spot in the semifinals on Saturday.

Russia’s opponent in the quarterfinals was determined a few hours later when Croatia and Denmark battled to the very end and needed a penalty shootout to determine who moved on. The shootout turned into a goalkeepers showcase between Danijel Subasic and Kasper Schmeichel. In the end, it was Subasic coming up just a bit bigger to help Croatia advance to the quarterfinals for the first time since 1998.

If you missed any action from Sunday, you can find everything neatly recapped just below.

For most of the tournament to this point, Mexico’s victory over Germany held the title as upset of the tournament. That title now belongs to the host nation after Russia pulled off a shocking upset of 2010 champion Spain in a penalty shootout.

From a possession standpoint, Spain dominated the game but created very few threatening chances on goal. In fact, Spain’s only goal came courtesy an own goal by Russia that was eventually cancelled out before halftime.

Don’t let anyone fool you, this was perhaps the most boring game of an otherwise thrilling World Cup to this point. Neither side looked keen on scoring and decided to settle things through penalty kicks after 120 minutes of open play. Russian goalkeeper Igor Akinfeev etched his name in his country’s soccer lore with two saves in the shootout, including the game winner to push the hosts into the quarterfinals for the first time since before the Soviet Union fell.

Russia will try to continue its improbable run into the semifinals on Saturday while Spain head home wondering what went wrong when it all looked so promising just a few weeks ago.

Russia shocked the world as they advanced past Spain to the quarterfinals.

And the full penalty shootout for those who want to watch it:

Disappointment for Spain, elation for Russia.

Two goals in the first four minutes between Croatia and Denmark gave fans hope this match would serve as a palate cleanser following the earlier snoozer, but neither side could find another goal for the next 116 minutes and the second game of the day also came down to the penalty shootout.

Luka Modric actually had a chance to win the game outright for Croatia in the dying minutes in extra time but his penalty shot was brilliantly stopped by Danish goalkeeper Kasper Schmeichel in a sign of things to come.

Ten players lined up for kicks in the penalty shootout but only half found the back of the net thanks to stellar performances by Denmark’s Schmeichel and Danijel Subasic of Croatia. In the end, Subasic got the last laugh following his stop on Nicolai Jørgensen that allowed Ivan Rakitic to step up and send Croatia on to the quarterfinals.

Croatia can book their first semifinal trip since 1998 with a victory over Russia on Saturday. On the other side, Denmark came agonizingly close to advancing but will have to wait until 2022 for another shot at glory.

Croatia and Denmark scored early, but not often.

Watch the highlights of Croatia’s penalty shootout win in our 90′ in 90″ 👇 pic.twitter.com/jpnSUcgGoT

And once again, the full penalty shootout for those who wish to watch it again.

Both goalkeepers shined in the penalty shootout, but in the end it was Croatia who advance.

Watch the full shootout below. 👇 pic.twitter.com/Xg5Q7KsKLt

That marks the midway point of the Round of 16 meaning half of the quarterfinal field is set. Don’t worry though, there is still two days of Round of 16 action left and hopefully they live up to the bar set by those that came before them.

Saves of the Day

Only four goals found the back of net during actual play and none were particularly noteworthy. Instead, it was a day for the goalkeepers who came up with some big saves to keep their respective teams in the game. To show our appreciation for great goalkeeping, we are amending our “Goals of the Day” segment to highlight the best saves from Sunday’s action.

There are big saves then there are career defining saves like this one from Igor Akinfeev that put Russia into the quarterfinals of its home World Cup. Against all odds, Akinfeev and his fellow countrymen pulled off the greatest upset in World Cup history by knocking off Spain.

Akinfeev comes up HUGE for Russia!

Things did not end the way Kasper Schmeichel would have hoped but this save on Luka Modric in the dying moments of extra time gave his country a lifeline and kept their hopes of quarterfinal berth alive. Schmeichel went on to win “Man of the Match” for his efforts against Croatia.

Stopping a single penalty shot can be difficult but it was no big deal for Danijel Subasic who stopped three (3!) shots during Croatia’s penalty shootout win over Denmark. Doing battle with counterpart Schmeichel of Denmark, Subasic was able to get one better to push Croatia into the quarterfinals.

Check back tomorrow for more great goals (or saves) from the 2018 World Cup.

Once again we are bring back our “Fail of the Day” segment although this is more of a failure that has encapsulated the entire tournament so far. With Sergey Ignashevich’s own goal on Sunday, the 2018 FIFA World Cup has now hit 10 total own goals for the entire tournament and we are only halfway through the Round of 16.

Here’s every one of them. pic.twitter.com/9D0g6cnB3z

The previous record for own goals during a single World Cup was six and this World Cup surpassed that total back in the group stage. With 12 matches still to play, that number could continue to grow as the tournament progresses.

Halfway through the Round of 16 now and that means half of the quarterfinal matchups have been set. Courtesy their victories on Sunday, host nation Russia and Croatia have booked a date with one another on Saturday in Sochi for the last of the scheduled quarterfinal matches.

The second half of Round of 16 matches kicks off today with a pair of matches featuring two pre-tournament favorites and two teams looking to pull an upset. Brazil looked to be rounding into form in its final two group stages matches while Belgium appear ready to be make a deep run as well.

Japan and Mexico come into Monday having surprised quite a few people with their performance in the group stage. Japan escaping Group H as the runner-up shattered all expectations while Mexico pulled off the biggest up set to date in Russia, a 1-0 victory over defending champion Germany.

Both of these matches feature great upset potential as Brazil and Belgium are both expected to cruise, but this tournament feels as wide open as ever so be shocked if someone you don’t expect moves on. You won’t want to miss a minute of the action on Monday.

A lot if on the line for both of these squads as they meet in the Round of 16 with a quarterfinals spot on the line. Group partners in 2014, Brazil and Mexico will be plenty familiar with one another coming into this match. Mexico will be looking to advance to the quarterfinals for the first time since 1986 while Brazil carries the weight of a nation looking for its 6th World Cup title.

Belgium were one of the few pre-tournament favorites who lived up to its billing in the group stage, winning all three games. Japan shattered all pre-tournament expectations simply by advancing out of Group H so any further progress is just house money. This golden generation for Belgium is running out of time to win a major trophy and this may be their best opportunity ever.

Artem Dzyuba climbs into the Top-5 with his first half penalty against Spain on Sunday. Diego Costa remains in the Top-10 but he cannot move any higher after being eliminated by Russia. It should be noted, goals scored in the penalty kick shootout do not count towards a player’s overall total for the tournament.