Four games made of Saturday’s schedule for the third day of the 2018 FIFA World Cup in Russia and all four had one thing in common. They all featured at least one penalty kick during the game. In total, five penalties were awarded on Saturday but only three were converted. A big save by Iceland preserved their first point in World Cup history and a bad miss by Peru cost them at least a share of the points against Denmark.

Successful penalties from France and Croatia helped their sides to a victory while Australia converted a penalty in their loss to the French.

Let’s take a quick look at how it all went down on Saturday at the 2018 World Cup.

Coming into the 2018 FIFA World Cup there was a ton of pressure on the French national team to deliver on soccer’s biggest stage. Loaded with talent at every position, France entered Russia as one of the top favorite to hoist the trophy in Russia. Following their opening game against Australia in Group C, France is still a favorite but there are a lot of questions that still need answered.

France and Australia played to a scoreless draw through 57 minutes of action but chaos soon ensued for both sides. Antoine Griezmann went down just inside the box on what looked like a clean tackle but the referee went to video review and determined there was a foul on the play resulting in a France penalty kick, Griezmann converted the penalty to put France ahead 1-0 following the first instance of video review being used in the World Cup.

That lead did not last long for the French as only four minutes later, Australia was awarded a penalty of their own following a handball by Samuel Umtiti. Australian captain Mile Jedinak converted his penalty with ease to even the scoreline at 1-1 in the 62nd minute.

After VAR assisted France on their first goal, they got a little more help from goal line technology on their second. A flick from Paul Pogba went over the head of the Australian keeper and careened off the cross bar down onto the goal line. French players pleaded for a goal and it was given when the ref was notified by the technology that the ball did in fact cross the goal line. France retook the lead 2-1 with ten minutes remaining and it was a lead they did not surrender.

A closer than expected match still ended with the expected result but France must now answer a lot of questions going forward following an uneven display against Australia.

It wasn’t France’s best performance, but they got the 3 points anyways.

Catch the highlights in our 90′ in 90″ 👇 pic.twitter.com/XfKvvRRyuC

Two years ago at Euro 2016, the Iceland national team burst onto the scene with a series of shocking upsets that saw them advance to the quarterfinal stage. That success at Euro 2016 helped propel Iceland through UEFA qualifying and into the World Cup to the first time.

Iceland, the smallest country (based on population) to ever qualify for a World Cup, played their first ever World Cup game against powerhouse Argentina led by Lionel Messi. Iceland earned a draw for their first World Cup points.

Argentina dominated possession all game but struggled to find the goals necessary to secure all three points. In the 19th minute, striker Sergio Agüero made a turn on the ball a rifled a shot into the top corner for a 1-0 Argentina advantage. Four minutes later the score was level once again following a goal by Alfred Finnbogason.

The score remained tied deep into the second half when Argentina was awarded a penalty after a player was hauled down in the box. Messi stepped in to take the penalty but his shot was stopped by Iceland keeper Hannes Halldórsson to keep the game tied. Messi had another look at goal later in the game but his shot sailed wide of the post.

When the final whistle blew, Iceland fans erupted with cheers while Argentina could only rue their missed opportunities.

Iceland got a historic point. Messi couldn’t get it done.

Watch all that and more from Argentina vs Iceland in our 90′ in 90″ ⬇️ pic.twitter.com/Ok1LuV6XTt

This is not Peru’s first World Cup appearance but a lot has chance since they were last in the tournament back in 1982. Playing their first World Cup game in 36 years, Peru came out blazing and Denmark responded with a fast paced game of their own.

Both sides traded chances in the first half but neither could find the score sheet. VAR made another appearance on Saturday when the system was used to award a penalty to Peru during injury time of the first half. Unfortunately, the ensuing penalty shot was sent over the bar and the game remained scoreless.

Denmark controlled the better of possession for most of the game but they broke the deadlock on a counter-attack going against the run of play. Yussuf Yurary Poulsen received a pass and broke away from the Peru defense. Alone on goal, Poulsen struck the ball cleanly with his left foot into the back of the net for a 1-0 Denmark lead in the 59th minute.

Trailing 1-0, Peru put the pressure on the Danish backline in search of an equalizer. They were able to create good looks at goal but nothing could get past Kasper Schmeichel and Denmark walked away from their opening game with three points.

Peru had 6 shots on goal, but were unable to get past Schmeichel!

Catch the highlights of Peru vs Denmark in our 90′ in 90″ pic.twitter.com/a8w1yAaQTk

Coming off the excitement of the Peru/Denmark match, Croatia and Nigeria had a lot to live up to. Sadly, the two sides could not generate the same excitement as the previous match but at least they both looked good.

At the 32 minute mark of the first half, Croatia jumped in front 1-0 but not from their own doing. From a corner, Croatia put a shot towards goal off a header but the ball careened off Nigerian midfielder Oghenekaro Etebo in front of goal and across the line for an own goal.

Things went from bad to worse for Nigeria in the second half as Croatia kept searching for a second goal. In the 71st minute the two goal advantage was achieved. Again off a corner, Nigeria committed an egregious foul in the box that awarded Croatia with a penalty. Star midfielder stepped up to take the penalty and easily converted for a 2-0 Croatia lead that stood for the rest of the game.

Croatia started the FIFA World Cup with a tough win over Nigeria.

Catch the highlights in our 90′ in 90″ ⬇️ pic.twitter.com/VrGeXFEDK1

It was a double dose of good for Croatia as they secured all three points and took advantage of Argentina’s draw earlier in the day for an early advantage in Group D.

Not was many goals as Friday but some beauties were scores nonetheless across four games on Saturday. Here are our three best.

If you score your country’s first ever World Cup goal and its against Argentina you automatically make our list. Finnbogason played opportunist and tapped in a loose ball to score the tying goal for his side.

It was not an easy day for France but they were able to escape with three points against Australia thanks to this timely goal from Paul Pogba. Goal line technology shows to the ball crossed the line by the slimmest of margins but it all counts the same.

What a run by Paul Pogba to finish off a pretty team goal! 😍 pic.twitter.com/xfPqDQDyDU

An altogether crazy game between Denmark and Peru was decided on a counter-attacking goal off the left foot of Poulsen. Against the run of play, Poulsen received a wonderful touch pass from Christian Eriksen and finished with ease.

Denmark go in front thanks to Poulsen!

Peru will be kicking themselves for not taking advantage of their opportunities. pic.twitter.com/jjQYBDcDEm

Check back tomorrow for more great goals from the 2018 World Cup.

Four games on Saturday mean both Group C and Group D have completed their first round of group play. France and Denmark share the lead atop Group C with three points a piece and identical goal differential. Croatia’s dominating win against Nigeria gives them the early advantage in Group D.

Groups A, B, C, and D have all completed their first round of group matches.

Sunday is a return to our normal group stage schedule with three games on the docket for Match-day 4 of the 2018 FIFA World Cup in Russia. All four teams from Group E and two teams from Group F will begin their World Cup campaign. Defending champion Germany and pre-tournament favorite Brazil will be must watch television.

A surprise run to the quarterfinals in the 2014 FIFA World Cup put Costa Rica on the map in international soccer. Another storybook run for the Ticos begins with advancing out of a very difficult Group E and that journey commences with an opening game against Serbia. The Serbs bring a deep and talented squad to Russia capable to a deep run of their own.

Spain and Portugal grabbed all the headlines but this matchup between Germany and Mexico could be a dandy as well. The Germans are the defending champions and looked primed for repeat while Mexico is hoping to advance to the quarterfinals for the first time since 1986. Both sides are playing well entering the tournament and we should see a competitive gave between the two.

Brazil were left beaten and embarrassed at the 2014 World Cup on their home soil following a 7-1 drubbing by the Germans. Four years on, Brazil are back on the world stage and ready for a return to glory. Switzerland have developed into a World Cup mainstay but don’t have the fire power to hang with the Brazilians. Their hopes of advancing will rely on their other two group games.

The Golden Boot Award goes to the stop goal scorer at the 2018 FIFA World Cup. 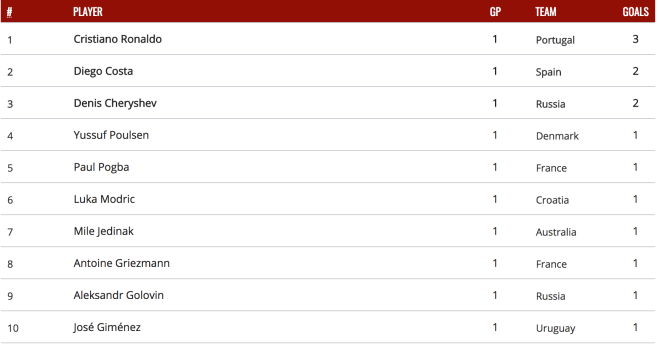 One thought on “World Cupdate: Penalties on Penalties”