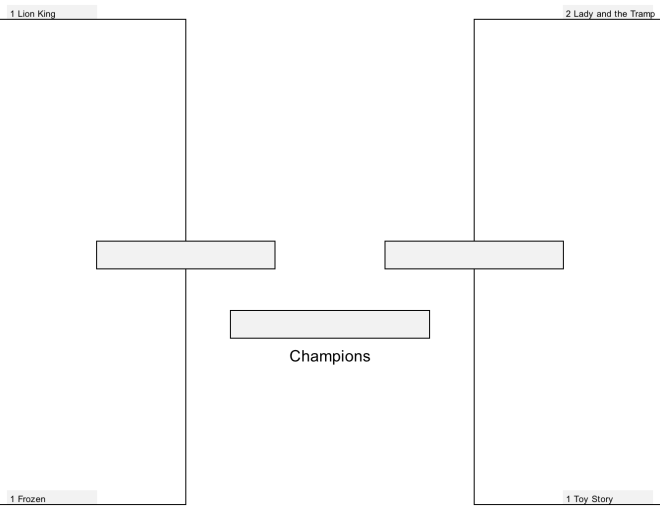 Voting on the Elite Eight matchups came to a close on Thursday afternoon and four movies earned the title of regional champions and advanced to the Final Four. Voting went about as you would have expected, three number one seeds advanced, but there was one minor upset along the way.

Now we move on to the Final Four where the regional champions will battle it out for a spot in our championship match. As the top seeded region overall, Golden Region champion The Lion King will take on Frozen, the champion from the lowest seeded Modern Region. The other matchup will include our only non-number one seed Lady and the Tramp squaring off with Pixar champion Toy Story.

Before we get to the Final Four matchups, let’s check out how we got here with a quick recap of the Elite Eight.

Coming out of the Golden Region was the top overall seed in the bracket and expected winner The Lion King who knocked Aladdin right off his magic carpet.

Our one minor upset in the Elite Eight came in the Class Region where No. 2 seed Lady and the Tramp eliminated Snow White and the dwarfs in resounding fashion.

Another expected favorite took home the title of best Pixar movie as Toy Story pushed past Nemo and his underwater friends for a spot in the Final Four.

Our last spot in the Final Four went to the ice queen Elsa as Frozen swept past Moana to claim the Modern Region title.

Here is how the bracket stands through the Elite Eight voting:

Our recap of the Elite Eight is complete and all of the regional titles have been claimed. Now we move on to the Final Four where a champion is set to be crowned this week. The two winners from the Final Four matchups will face off against one another in the championship match to determine the best Disney movie of all time.

All voting will be conducted via polls posted to our Twitter account which you can find right here. Polls will be open for 24 hours.

Get those votes in and check back for the results right here on our site.

Reminder that all polls for this round will be open for 24 hours.

After the voting concludes and the winners announced, voting on the championship match will begin on Wednesday.

Keep your eyes peeled on our site for continued updates and new polls throughout the duration of the tournament.