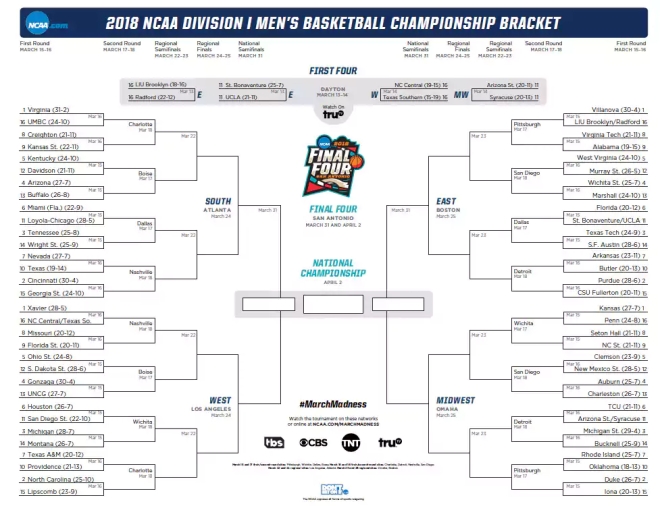 It’s OK to not fill out a bracket. No, seriously. You are under no obligation to fill out an NCAA Tournament bracket for fun. For office pride. For a chance at some cash reward that you won’t come anywhere close to sniffing about 6 hours into the tournament because your strategy of taking Pennsylvania over Kansas to shock the world didn’t quite pan out.

Put down your pens. Step away from the mouse. Just enjoy the chaos.

In fact, anyone rooting for chaos would do better to just not fill out a bracket and watch it all unfold organically. No worries about how you lost four of your regional finalists by 11:59 p.m. Friday. No lamentations about how your East Region has more red on it than a Coca-Cola bottle.

Not filling out a bracket is a refreshing way to enjoy an event that almost annually peaks in the first weekend before fizzling to a finish in early April. For those fortunate enough to not work those days/nights, stuffing roughly 376 hours of basketball into two days is one of the best things to do during the sports year.

Filling out a bracket can be rewarding, but not filling out a bracket is a gift that keeps giving all through the tournament. No internal data crunching on how a budding Cinderella team totally wrecked your left side of the bracket in the span of 48 hours. You can just enjoy that low- or mid-major’s time in the spotlight …

… Unless your school was one of the victims mowed down along the way. Then your enjoyment levels may plummet.

But let it be known that for the non-participants there are rules that you have to follow. Because rules are rules.

Now if you just want to be a jerk about it, you can always complete a women’s bracket for funsies. If you’re going to troll people for mindlessly or obsessively picking 63 games in the men’s tournament, go for the full trolling and make your picks based on who might make Connecticut sweat before realizing that the Huskies are going to go full 1984-87 Hulk Hogan on the field.

But if you need help in predicting a Final Four, I’ll take the 17 seconds out of my life and offer this group, selected just for you …

Take Villanova to win the whole dang thing, just don’t expect me to write it down.