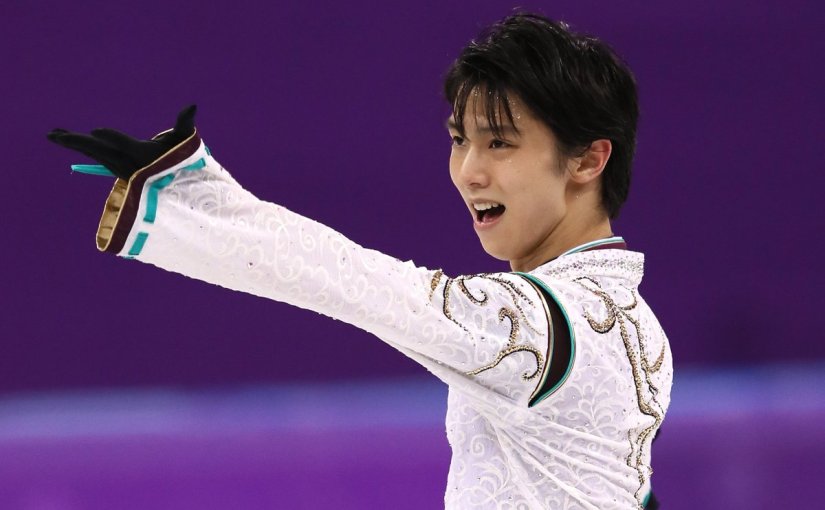 Another big day of medal competition went down in PyeongChang as we get ready to enter the second week of the 2018 Olympic Winter Games. With still a little over a week left to play out, the top medal contenders are starting to take shape and gain a stranglehold on the medal table.

Friday’s action began in cross-country where Switzerland was finally able to capture their first gold medal of the Games despite falling just short a few times earlier in the week.

Dario Cologna put the Swiss on top of the medal stand for the first time with a comfortable victory in the men’s 15km freestyle event. Norway continued to add to their medal haul with a silver on the back of Simen Hegstad Krueger, his second medal in PyeongChang. Rounding out the podium was Denis Spitsov of OAR with the bronze.

The result was made at around 5 on 16 Feb. Congratulations to all!🎉
모두 축하합니다! #PyeongChang2018 pic.twitter.com/nZoleMOgfA

One of the great moments of these 2018 Games also came during the men’s 15km but it had nothing to do with a medal. German Madrazo of Mexico finished last in the race, nearly a half hour behind the winner but just completing the race was an accomplishment for Madrazo who just picked up the sport in 2017. Coming down the final stretch, Madrazo was handed a Mexican flag which he carried across the finish line where he was greeted by fellow racers and given a heroes send off. Gold medal winner Cologna was one of the fellow skiers waiting along with our favorite Tongan flag bearer Pita Taufatofua.

Mexican cross-country skier German Madrazo crossed the finish line last, but he was all smiles as he did it proudly carrying his nation’s flag. ❤️ pic.twitter.com/8qILNmFjyE

After a few days off, freestyle skiing resumed in PyeongChang with the women’s aerials competition. Several qualifying rounds set the final field six and it was Hanna Huskova of Belarus who took home the gold with a winning score of 96.14.

Back over on the long-track it was the women’s 5,000m event, the longest discipline on the women’s side.

To absolutely nobodies surprise, it was The Netherlands topping another podium in a long-track event. In her only scheduled event during the 2018 Games, Esmee Visser laid down the best time by over a second to claim the gold. Two time defending Olympic champion and world record holder Martina Sablikova of the Czech Republic failed to make it three in a row and had to settle for the silver. Natalia Voronina of OAR completed the podium with the bronze.

Returning to the Olympics for the first time since 2010, American Lindsey Vonn was the first skier out of the gate in the women’s Super-G race. Vonn started her race well but a late mistake saw her overshoot a turn and cost herself valuable time that ultimately cost her a spot on the podium, finishing 5th.

Through the 19 skiers most thought were capable of making the podium, 2014 Olympic champion Anna Veith of Austria sat in gold medal position. Then Ester Ledecka, the 26th to go, shocked everyone and laid down the best time of the day to take over first place. Her run was so shocking, NBC had to cut back to alpine coverage to break the news.

When all the dust settled, there were no more shocks from the rest of the field and the podium was finally set. Ledecka of the Czech Republic won gold with her stunning run by a 0.01 seconds over the Austria Veith who settled for silver.

Tina Weirather of Liechtenstein, a small principality between Austria and Switzerland, won her country’s 10th all time medal and first since 1980 with the bronze.

Figure skating is always under the spotlight at the Olympic Games and that has been no different this year. After the pairs completed their event two night ago, it was the men’s turn to crown an Olympic champion.

American favorite Nathan Chen had a disappointing short program that cost him a spot on the medal podium. Although his medal shots were long, Chen still performed the best free program with a 215.08, highlighted by six quads to finish 5th. Fellow Americans Vincent Zhou and Adam Rippon finished 6th and 10th respectively to join Chen in the top 10.

As for the medals, Yuzuru Hanyu of Japan added to his leading short program with another strong skate in the free to defend his gold medal from 2014.

Fellow Japanese skate Shoma Uno claimed the silver and Javier Fernandez of Spain rounded out the podium with bronze.

One final medal to award on Friday and it was back over at freestyle skiing in the women’s slopestyle competition.

It came down to the final run for the medals to be decided but in the end it was a Swiss 1-2 on top of the podium. Saving her best for last, Sarah Hoefflin dropped a 91.20 to overtake her teammate for the lead. No other skier could match the score of Hoefflin and she took home the gold. Mathilde Gremaud stood next to her teammate in the podium with a silver and Isabel Atkin of Great Britain finished with the bronze.

Tons of action took place in the non-medal events as well. Here’s what you may have missed:

Hopefully you don’t have any plans for Saturday so you can spend the day inside watching the action in PyeongChang. It’s another loaded schedule of exciting action all day long. Buckle up.

Before we break down what to watch, here is Saturday’s schedule of events: 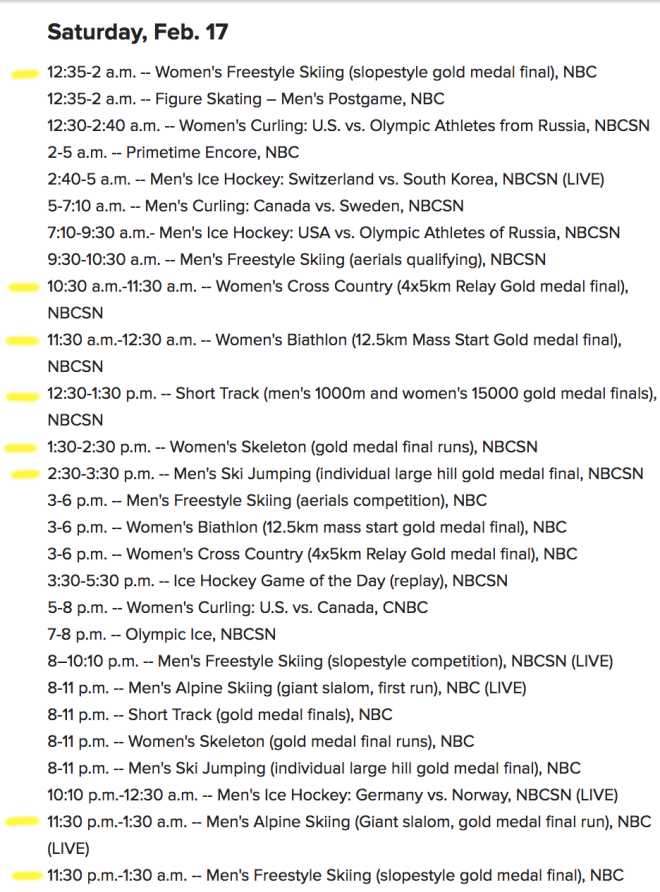 Whatever your taste, there is surely something for you to watch on Saturday’s packed schedule.

A quick look at the medal table after Friday’s action:

Norway remains on top and extends their lead with a strong showing on Friday. Germany still holds a comfortable lead in gold. Austria jumps into top five while the United States drop to seventh after another day with no medals. Switzerland jumps into top ten.